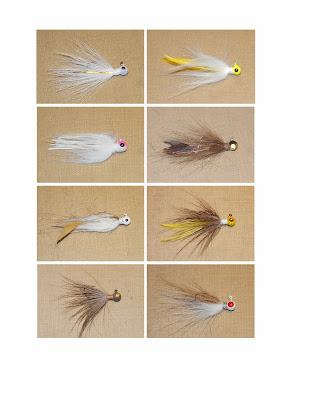 Highs in the 20's today. More hair jig tying weather. My goal is to have three hundred tied by spring. So far I've got about 65 or 70 done. Here's some pics of several different styles I've got done so far...

Posted by thatoneoldguy at 5:31 PM No comments:

How to purchase my book on CD.

By spring we expect to have a hardcover version of my book, The LMR for sale. Right now all I have available is the Cd version. By print a few of the photos might change and a few more grammatical mistakes fixed but the content will be the same as the CD. You can transfer the book from CD to your computer and it opens like any other PDF book. You can scroll down or select any page you wish as well as zoom in or out. You can transfer it to any of the book readers too. It's worked on those I've tried. Well I haven't really got it set up yet to sell online with a credit card but If you mail me a check for ten bucks I'll make sure and mail you out one within a week. My address is Steve Coomer, 120 South Sycamore street. Lebanon, Ohio 45036.
Be sure and specify South Sycamore. If you put just Sycamore it goes somewhere else. The book will come on Cd in pdf form. Most reader programs will let you scroll down or put in the page you want to see plus make the type as big or little as you want. It costs around two bucks to package and then mail it so I think that's a pretty good deal. If you river fish for smallmouth you will enjoy this book.
Posted by thatoneoldguy at 3:04 PM No comments:

Fly selection for the Little and Great Miami Rivers

Well it's that time of year. Time to venture out once in a while after saugers but mostly just wish for spring. And tie flies. I tell you what I do. I hit the Orvis store at the Dayton Mall and try to reverse engineer some of their flies. To me they have the best smallie fly selection around and some weirdly cool flies you just can't find anywhere else. Like for example my favorite crayfish fly, May's Clearwater Crayfish. 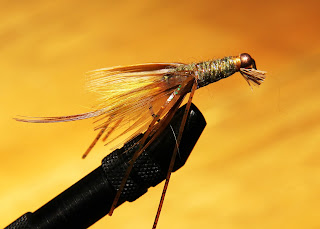 I love this fly. It has everything I'm looking for in a crayfish fly. Good color. It sinks like a rock. Rubber legs for movement. And only the suggestion of claws. Study after study shows smallmouth prefer crayfish with little claws, or no claws for that matter. This guy is pretty close to the perfect crayfish fly in my book. I fish it on a short line, usually across and down in riffles and runs.

Other flies I fish in this manner are weighted stonefly nymphs and two other weirdly wonderful flies, the Conehead Rubber Bugger and Shultzy's Red Eyed Leech. I think both the rubber bugger and the Shultzy look a little bit like a whole slew of stuff smallmouth are looking to eat in runs and riffles. They slightly resemble everything from a darter to some kind of big nymph to even a little crayfish. At any riffle on the Little Miami there's going to be a dozen kinds of little dark and rusty colored little fish in and among the rocks as well as a list of invertebrates as long as your arm. I think a smallmouth up on a riffle sees a lot of different stuff and isn't about to be as selective as a fish in slower water. That's why I really go for these generalized creepy crawly flies. 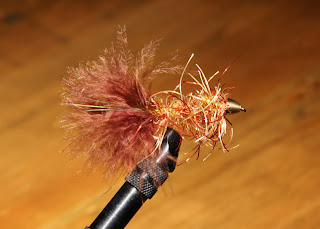 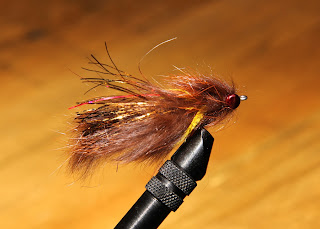 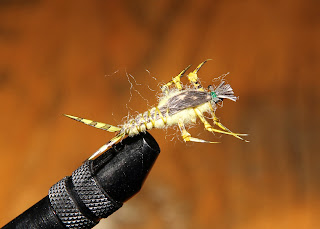 When fishing pools for smallmouth I try to imitate shiners more than anything else. Both the LMR and GMR have about a dozen shiner species and in most stretches of calmer water they are far and away more common than anything else. I like unweighted shiner flies because shiners are usually more active high in the water column and don't hug the bottom like riffle minnows and darters. 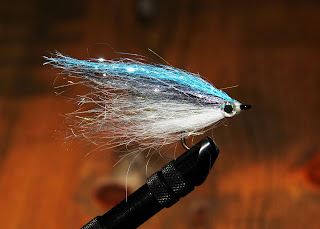 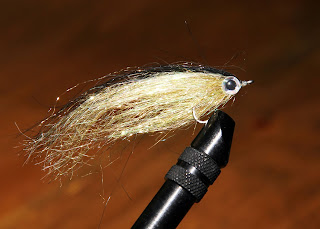 As a general rule I try to fish heavier weighted flies and darker flies the closer I get to the riffle and lighter colored flies the farther I am into the pool. This is in a broad general way following the pattern of the dozens of little baitfish in the river. But there are exceptions to the rule. There are so many variables that this only gives you a place a place to start. If the fish aren't biting don't be afraid to experiment. The food chain in smallmouth streams is more complicated than that of just about any other kind of water. If someone tells you they know exactly what's going on down there at any one time, you know just how little they do know. Sometimes we catch fish in spite of our best theories. We think we are catching smallmouth feeding on crayfish and they are actually feeding on rainbow darters flushed out of the rocks by crawfish too big for smallmouth to eat. Or any of a hundred other scenarios that might be going on at any given time.

And of course you have to have some topwater flies. This is stream fishing at it's very finest. I throw deer hair bugs a lot just because I have a huge supply of deer hair but a sneaky pete might be a better choice if your only going to buy or tie one. A sneaky pete lets you you fish the slicks in the tail of pools without getting waterlogged like a deer hair bug but is just as effective as the deer hair in quiet water. Some days a deer hair bug or sneaky pete can simply be deadly. Another fly I fish on the surface is a marabou muddler. I know its a streamer but dressed with just a bit of floatant it fishes in the film. I call it fishing it soggy, not wet or dry. Its exciting just like topwater fishing and just as visual. 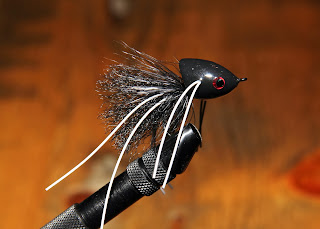 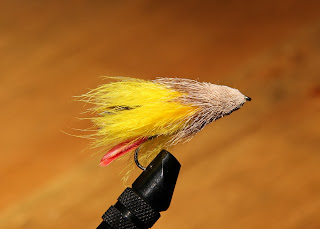 Posted by thatoneoldguy at 6:22 PM No comments:

Below is a link to the complete list of water quality and biological surveys done by the EPA in Ohio. When you first open a study on one of your favorite streams you think what a incomprehensible miss mash. Why did Steve ever think this was worthwhile? Well what you gotta do is scroll down thru the hundreds of pages in the appendices of flow charts and nutrient loads and gobbligook till you get to the sampling data for the different locations along each stream. Here you will find a complete species list AND how common each is in that stretch of river. It may be cool to have one mountain madtom but if there are three hundred emerald shiners guess which one you should think about imitating with your lure...


if you take the time to really look at your favorite streams data it will change how you fish it next summer
Posted by thatoneoldguy at 5:44 PM No comments:

My favorite kind of trip

I simply love to fish. I'd fish in a puddle for minnows with thread if that's all I could do. But everyone has a favorite kind of trip. I think mine is that early summer day when you feel the whole summer stretching out before you full of possibilities. A lunch thrown in the rucksack, a couple little boxes of lures, a spinning rod and nothing else. There's this one special place I fish. It's a stretch of river with small pools interspersed with small riffles and then a big chute no one could ever wade. Enough water to feel, like summer, seemingly endless. Even if neither actually is. During the week at least, more than likely I won't see another person all day. In the early morning, as the light shines golden on the very tops of the trees, deer are almost always somewhere. Wading the river in a shallow riffle, picking slowly along the bank, maybe just the flick of an ear or tail in the brush. In the early morning I wade slowly fishing things like pop-r's or minnow plugs, trying to coax a smallmouth to the surface. I remember last year throwing a pop-r in a tiny little pocket below a limb and twitching it once. A smallmouth, perhaps ten inches long, jumps out of the water taking the plug on the way down. It doesn't take many fish like that to make a perfect day for me. Later on as the bands of sunlight slowly slide down the trees and touch the water, I fish a spinner or a crankbait in the faster water. Maybe catching the slash of a good fish as it flashes out at the lure in the current. Before I know it the morning has gone. Maybe Ill hear the cry of a redtail circling overhead and look up to find the sun straight overhead. Then Ill find a big rock to use as a place to spread out lunch. Or maybe up in the woods if it's getting warm. But always where I can sit and watch the river while I eat. There's always something to watch sitting beside a river. After lunch is harder more technical fishing. Fishing the runs and deeper slots with a hair jig or grub. Carefully paying attention, trying to feel the lightest tick or even just the momentary pause in the drift that might mean a fish. As day slowly turns to evening, this will often produce the best fish of the day, a fat smallmouth lurking along the current edge or suddenly the heavy weight and the throbbing of a big channelcat taking the grub in the fast water of the chute. As I'm unhooking the channel I'll notice I'm in shade the line of sunlight from this morning has crossed the river and is now making it's way back up the trees on the other side of the river. I'll switch to a spinner and fish the shallow pools for the smallies that move up here shallow on summer evenings. These are some of my favorite fish of all. One second the pool calm and serene, the surface still or maybe only marred by the bulge of my spinner just under the surface. The next second a savage strike and the wild runs and jumps of a smallmouth hooked in really shallow water. Often one of these fish will be so perfect I'll use it as a perfect frame for the day and end with that fish. Other days Ill find myself caught up in the river, unable to leave and fish till the moon is high in the sky and I'm fumbling thru my pack for the headlamp to light my way thru the woods back to the truck.
Posted by thatoneoldguy at 4:35 PM No comments: