The last fish of the year, it was too cold to pick up for a better photo... 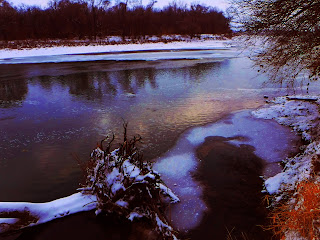 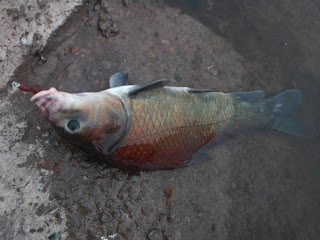 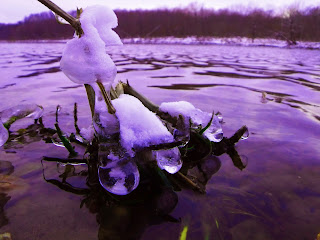 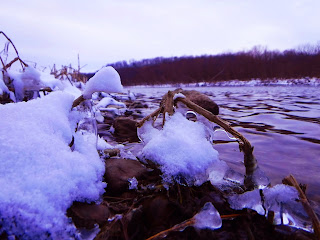 Posted by thatoneoldguy at 7:31 PM No comments:

Very rarely in life do we really come up with an idea that is truly our own. The idea that we can use public data that no one knows about and create a lure selection tailor made specifically for the exact spot that we fish is the closest I've come I guess. Just about every stream in the United States big enough to be of interest to fishermen has been sampled by the EPA. Large creeks and all rivers have been surveyed at multiple points along their length. I know here in Ohio our rivers probably average having been electrofished by the EPA at roughly a four mile interval along their length. What this means is that you can get a snapshot of what lives in not just your river but what lives in the section of river you fish in. And trust me I've been looking at these things for a while now and they can vary wildly, even in the same watershed. The river might have ten darter species in a headwater section with the majority of those being of one or two species in particular while in another section there are literaly thousands of central stonerollers and then in the lower river there may be more shad than anything else. And sections just a few miles apart can vary as well. And quite often the species makeup in the tribs is nothing like that in the main river. For instance here are a couple examples. 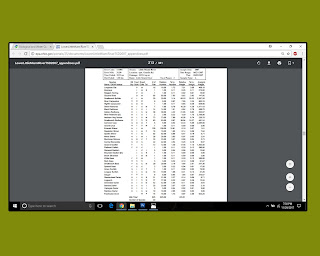 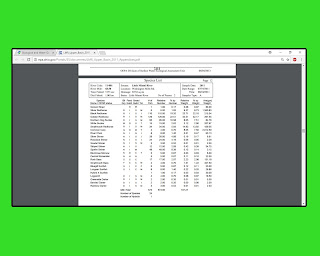 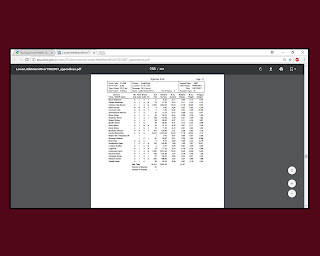 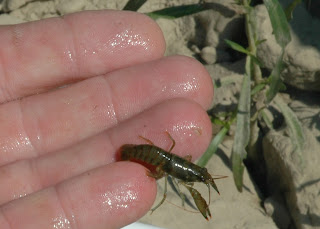 Posted by thatoneoldguy at 8:00 AM No comments:

I'll have some things set up at the fishing tackle show this Sat at the Towne Mall in Middletown. The show runs from 10 to 4 and I'm hearing there is like twice as much tackle as at the last one so it should be pretty cool. I'll also be giving a talk on smallmouth fishing at noon. The weather is going to be cold and nasty, ya might as well stop by and talk fishing with me....
Posted by thatoneoldguy at 4:23 PM No comments: 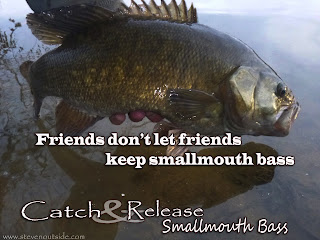 Posted by thatoneoldguy at 7:35 PM No comments:

From the looks of the weather forecast I figured tonight was probably the best smallmouth fishing I'd get for awhile. More saugeye and stripey fish weather coming up for a while anyways. It's not that they cannot be caught when it's winter, you just are going to do much better fishing the tail end of a three or four day warming trend like we've been having rather than fishing the first few days of a cold period. Sure enough you could just feel the temperature drop minute by minute this evening. But last nights warm rain still had a couple quality smallmouth willing to bite. Same drill as the day before, a pearl ribeye swimbait on a 1/16th ounce jighead fished as slow as I could fish it on light line. Same location as well, right on the very edge of the hole, fairly shallow but out of the current. 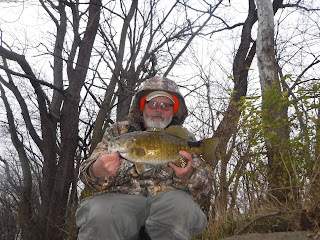 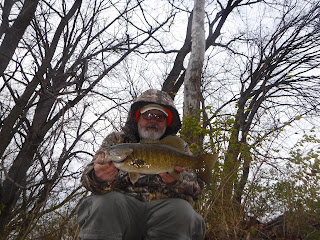 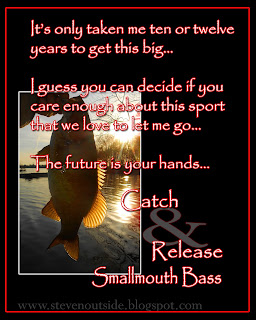 Posted by thatoneoldguy at 4:44 PM No comments:

I love watching Timmy Horton Outdoors. He will be fighting this bass and the rods bent double and he will finally get it up where he can see it and he will say in this excited almost half whisper, " oh, oh, oh, he's a giant!"
Well tonight walking back to the truck in the dark and reliving the previous hour in my head I realized I'd done that exact same thing. The fish had come up and kind of wallowed on top shaking it's head and I'd said to the trees I guess since no one else was around... " oh, oh, oh, he's a giant!"
All pumped up after seeing all of Erik Watson's photos of the hawgs he had caught the day before I'd decided to take the long walk back to one of my most favorite fall and winter spots. The problem was I got off work at 3:30 had to drive 30 minutes and then walk back there. I'd have at most an hour or hour and a half till dark.
I fished a pearl ribeye swimbait on a light 1/16th ounce jighead so I could work it really slow. I only caught two fish but oh my goodness what beautiful two fish. It was truly just about the most magical moment of the entire year. Two smallmouth that together totaled almost forty inches on six pound test in December. I'll remember this hour of fishing till the day I die. 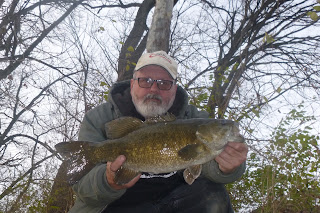 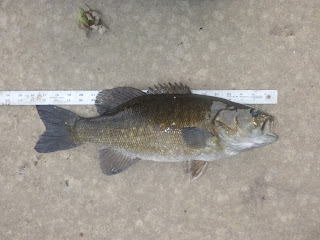 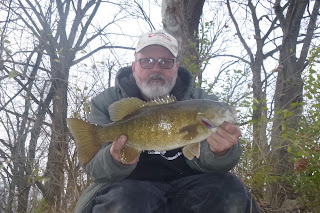 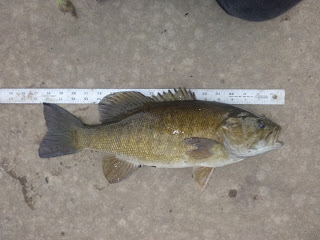 Posted by thatoneoldguy at 5:44 PM No comments:

A bit of fishing and hunting...


I still had a tag I could use on a doe so I decided to spend one last long weekend in the deer woods. Such odd weather and hard to dress for, freezing cold at night then warm by afternoon. About nine thirty down the hill I could see the body of a deer making a beeline right for the deer feeder. Please please please be a doe. Though I was afraid it wasn't since it was walking steady. Which is more like something a buck would do. Sure enough it was a pretty nice eight pointer, almost a twin to the one I'd harvested a couple weeks ago. He walked right up to about 15 feet away and then stopped. You could almost see the look of shock on his face as he stared up into the tree. He walked sideways a few feet staring hard the whole time then just froze and the big stare down began. The deer feeder was really too close to the tree for the muzzleloader but it had worked out great for bowhunting. Finally he actually stepped backwards two or three steps then turned and walked back the way he came, tail up nervous as all heck. A check of the trail camera showed only the buck visiting the feeder the last couple weeks and two more sits up the tree confirmed this so with a buck and a doe already in the freezer I decided to fish the last day and a half of my long weekend.
First up was a dam on the Ohio. Like seemingly everyone else that is fishing a dam on the Ohio right now I was soon completely covered up in saugers. Unfortunately all of them small. They made up for their lack of size with numbers though and I soon lost track of how many hit my pearl ribeye swimbait. Right at dark a couple pretty nice hybrids hit the swimbait as well which made me very happy. Then I felt something and set the hook into something very very heavy. I'd snagged a huge paddlefish. One hundred miles upstream from where I'd caught the other paddlefish this fall. This guy was huge though. I had a really hard time holding it up and controlling it to try and take a photo which is why I have such lousy ones of the fish. Not wanting to keep it out of the water too long I finally decided those would have to do and let the fish go. Then it was back to never ending saugers till it got a bit too cold. Back to deer camp and a roaring fire. It was dead calm and with the fire baking me I leaned back and looked at the huge full moon thru the binoculars. What a magnificent sight. If you have never tried it you are missing out.
The next morning the sun rose on me at the mouth of a pretty good sized trib to the Ohio much closer to home. But not much was going on and I managed only one small bass before finally calling it quits.
That afternoon found me joining Rob on an exploratory trip to a pipe that was pouring warm water out into the river. The photo of the bridge I took about five minutes before the plants security officer pulled up and ran us off. Sigh...it all looked so good too.
All in all a pretty swell weekend in the woods. 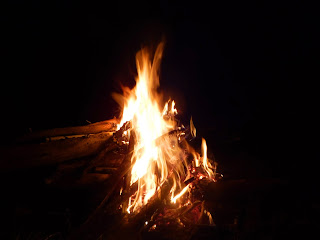 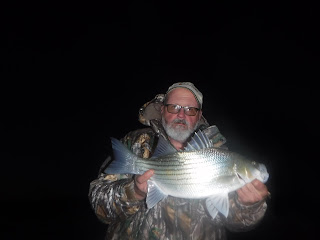 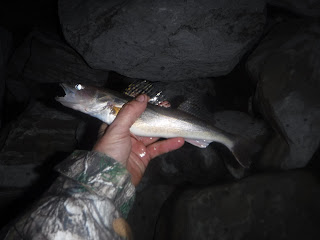 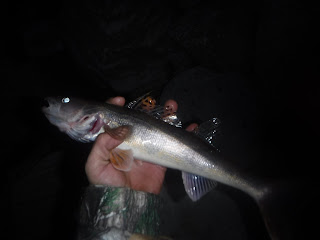 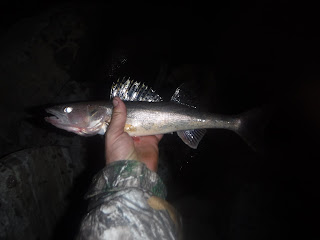 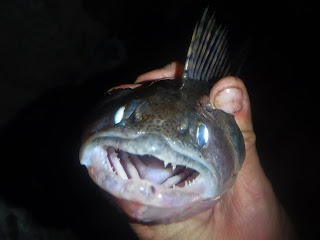 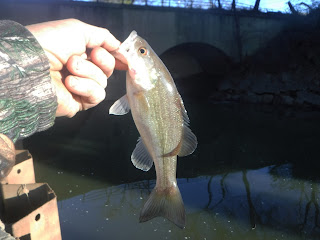 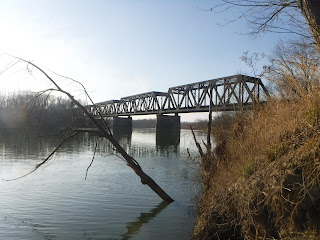 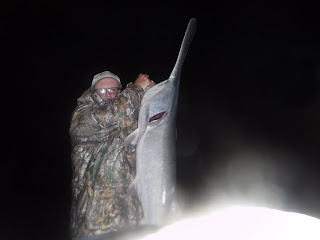 Posted by thatoneoldguy at 5:06 PM No comments: