Sunday September 1st at 10 am. Little Miami Inc. is hosting a free Orvis flyfishing class at the Scenic River and Trail Center in Nisbet Park, Loveland. It's about a two to three hour course on basic flyfishing plus fly casting on the grass and the water by an Orvis instructor. Orvis is providing all the tackle so you must send me a message at Steveocoomer@mail.com letting me know your coming so they can have enough there for everyone. Other than that all you gotta do is show up because its all free.
Posted by thatoneoldguy at 12:52 PM No comments:

The path to Eden

It seems too often we fish nowadays like we eat. We want our fishing served up fast food style, neatly packaged and in a hurry. But I had all evening and night. The wife was working, the granddaughter not due in town till tomorrow evening. I hit the river way upstream. Farther than I'd ever been before. It was low but still a bit off color from the recent rains. Right away I caught a small bass and then an even smaller crappie. I'm thinking okay, this is looking good. Then nothing. Nothing for an hour. If anything the water muddied up a bit more. I decided to head closer to home. I drove closer to home then I walked in to a long riffle that's an old friend. I'd probably been here 20 times this year already. Way across the river and downstream I could see the kids. Most of the time I come here I see them somewhere along this stretch of river. The number varies a bit but its usually two to four boys and a girl or two. The first few times I encountered these guys I was a bit apprehensive, after all it's me by myself meeting four teens out in the middle of nowhere. But for the most part they just ignore me. If we meet crossing a riffle we might nod or say hi but other than that we all just pretend the other isn't in "our" spot. One kid always has a seine and a couple more carry fishing rods. With bait fresh out of the river they are deadly on catfish. But I've always seen then release them. A couple times I've caught my line on lines they have broken off. Instead of lead weights they use old bolts and pieces of metal for weight. I've grown pretty fond of these kids that I don't know. After all they are outside living life instead of living thru facebook. Next year or at least the one after that they will all be out in the real world with jobs and car payments. But they will always have this glorious summer, spending all day every day wading and swimming and fishing. Making memories that will last a lifetime. Often Ill see them far off in the evening wading the river on their way home. The guys in swim trunks, the girls in shorts and bikini tops wading into the sunset looking like a scene out of a 1960's beach movie. I think they will have to be better adjusted adults with the memory of their perfect summer. I mean just how bad can a kid be that spends his entire day on the river? On this day they were all using a chute in a riffle as a giant slip and slide. I cut a wide circle around them so as not to intrude and fished the next hole. I caught a pretty nice sauger on a smoke metalflake grub and then switched to a square billed crankbait. I had a solid hit and landed a pretty channel cat. I went to unhook it and to my amazement it wasn't hooked at all. The crankbait was jammed straight up and down in it's mouth but no hooks were stuck in it. I hard a hard time getting the lure out it was jammed in so hard!
On the rivers far bank two bucks in velvet came out close to dark. One froze and watched me fish while the other completely disregarded me. I even caught and landed a couple smallmouth before they finally wandered back into the woods. After the deer left I noticed the the soft blue light of evening had settled on the river, painters light, and the only sound that of water over smooth stones. When I'm old I want to remember this. All of it. Every sound, the cold shock of the water when you first step in, the beauty of minnows scurrying away over moss covered stones. I rummaged around in my pack and found a carton of worms and settled on a rock to watch the coming night creep thru the trees. I wore that hour of sunlight, those fish, the colored clouds, like an old shirt the rest of the night, taking deep solace and comfort from it. Tap, tap, tap, a small catfish took the worm and fought in the determined circling way they have. Then another, then a slightly bigger one. By then full darkness had fallen. Down in the corner of the pack were two firestarters and a lighter. I wandered back up the bank to collect driftwood and ten minutes later had a small fire casting dancing shadows on the bankside trees. I began fishing again and a half hour later another small channel hit the worms. This one I killed and then gutted. I wrapped the fish in foil and placed it on a flat rock placed in the edge of the fire. I settled on a big log down by the river and had a fine supper under a lovely night sky with the moon slipping in and out of the clouds. I sat a long time just enjoying the rivers noise without fishing at all. Still soaking wet from wading I changed into dry clothes and began casting a lipless crankbait from the rockbar. After a bit I had a strong take and the drag sang before the fish was gone. About twenty minutes later a pretty 14 inch smallmouth hit and about a half hour later a decent channel hit the lure. And the rest of the night settled into this pattern. I'd set and watch the river and sky awhile then fish some, catching a few fish sometimes, sometimes not. Bone tired but contented I left for home and bed around dawn. 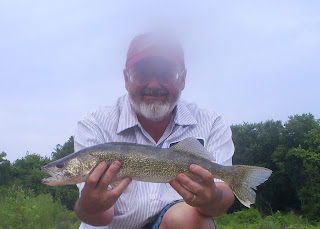 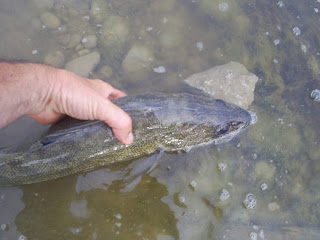 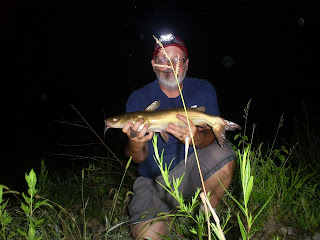 Posted by thatoneoldguy at 4:51 PM No comments:

I'm wading the river with the fly rod catching a few small bass on a stonefly nymph. In this little calm shallow spot right above a riffle I can see some fish milling about making waves. I cast the nymph in the general area. Nothing. I cast again. This time I can see a big tail tip up as a carp tails. I cast again towards where I think the head is. Nothing. I raise the rod to cast again and its tight to a fish. The fish bolts, taking with it three or four other carp in a giant whoosh that has about a ten foot circle of river looking like a giant toilet flushing. I had about five or six feet of loose line on the ground which jumps up and somehow clears the guides as the reel screams. I'm splashing upstream following the fish as it streaks thru the hole. Thank goodness it didn't go down the riffle. The tippet was six pound test and I was pretty sure I'd never land the fish. But it stays in the pool just making huge circles. Finally it starts to tire coming in till it sees me then streaks off again. Finally its half on its side just holding its place upstream of me. I wade up to it reeling and now Its in ten inches of water and if you have ever tried to land a carp with no net you know that isn't easy. Finally very ungracefully I just put a hand on its back and pin it to the bottom till I can grab it by a gill plate. A few pictures a measurement (29 inches) and a bit of fishy cpr by holding it upright by the tail and working the fish back and forth and it's gone, seemingly no worse for wear... 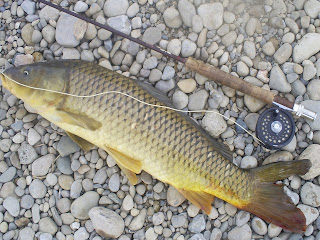 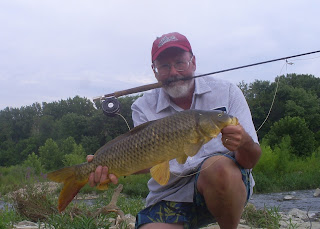 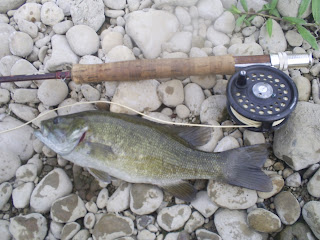 Posted by thatoneoldguy at 6:51 PM No comments:

This guy I work with doesn't fish. But his son has been dying to go so I said I'd go fishing with them. They have a lot on the GMR and I met them out there and rigged us both up and we fished off the dock. I caught a two small channels and let him reel them in. Then the line began to move off purposefully. "Here Robbie reel this rod in" He did and the rod bent double. "Now don't drop my rod!" He was having trouble holding the rod it pulling so hard. I coached but he did all the work. Hes kinda quiet and I couldn't tell how excited he was till we got it in and he said "I gotta go to the restroom, I almost peed my pants that was so exciting!" He took off towards the restroom excitedly and fell flat! It was an awesome fishing trip for us both 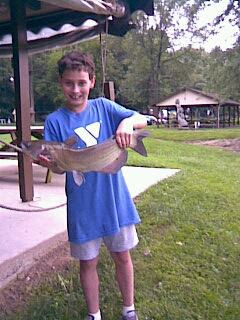 Posted by thatoneoldguy at 7:14 AM No comments:

Some photos from Raptor Inc's recent program at Little Miami Inc's Scenic River and Trail Center in Loveland. Raptor is a non-profit organization dedicated to the preservation of birds of prey through rehabilitation, education and conservation. If you find an injured bird of prey call Raptor at 513-825-3325 as soon as possible. 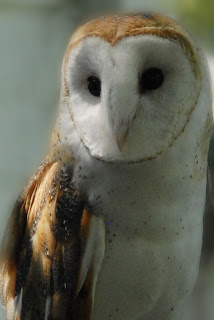 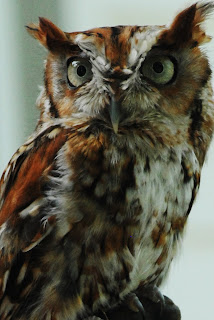 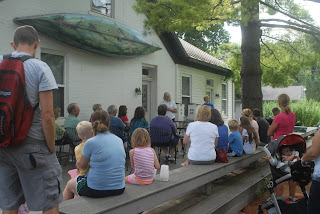 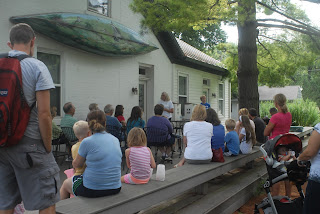 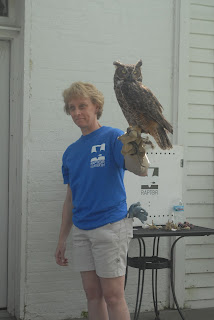 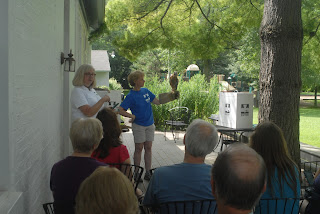 Posted by thatoneoldguy at 6:50 AM No comments:

I'll admit it. I'm something of a curmudgeon. Kids I love. They are open, honest, and pretty much have the right take on what's important in life. Like I said, kids I love. People, grown ups that is, not so much. Kids, like tiny fish, all have that potential. You never know which ones going to grow up to be something really special. But like tiny fry of all kinds only one in hundreds ever does. Which was why I was a bit apprehensive about meeting Kelly Riccetti. Kelly has for a long time now been one of my favorite people. On her brilliant blog www.redandthepeanut.blogspot.com she writes thoughtfully, takes wonderful photos and paints with passion and talent. And most of it takes place along my favorite place, the Little Miami. And now she was going to do a painting workshop for me at the Little Miami Inc Scenic River and Trail Center in Loveland helping people learn to paint. I was really hoping she wasn't a jerk.

Kelly showed up with her son in tow and enough painting supplies to paint the entire building. I was now really hoping some people showed up. I should have never worried. About Kelly or about people turning out to see her. She turned out to be just as personable and nice as she seems on her blog. And amazingly talented. And her son was as nice a guy as you will ever meet, truly wonderful people. And did people turn out! We had a hard time finding places for everyone to sit several times and Kelly stayed an hour past what was scheduled so that everyone that wanted to paint could. What a nice day this turned out to be for everyone... 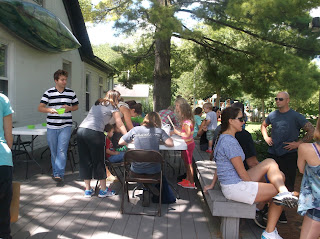 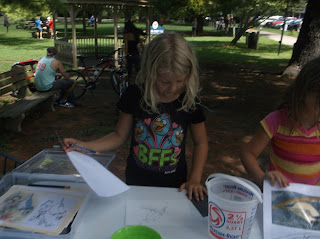 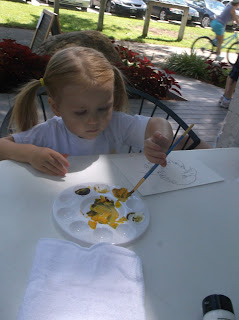 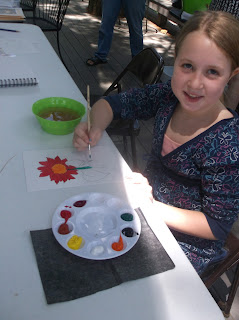 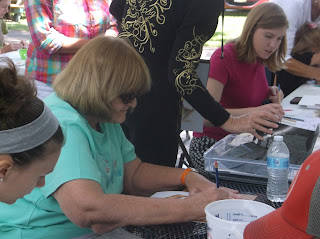 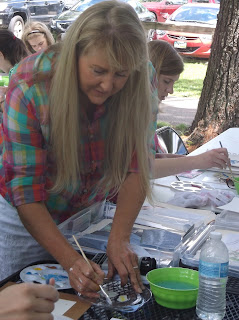 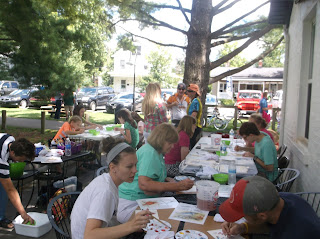 As soon as you have time to set down and relish some amazing stuff be sure and visit Kelly's wonderful blog, it's a gem.