Every few years we spend a week seaside at Hunting Island SC. In this time of recharging, unwinding, and wandering barefoot I'm drawn to the sand dunes behind the beach. Hunting Island is itself just a giant sand bar sticking out of the water on the edge of the great Atlantic. Covered in beach, maritime forest, and saltwater marsh. And on the margins of all these sand dunes composed of a bit of each. A nature lovers dream. Last time we were here I followed sea turtle tracks as they hauled themselves out of the ocean and across the beach to lay their eggs in the dunes. This year smaller tracks catch my eye as I wander away from the people and the beach and into wilds of the dunes.  Crabs, foxes, deer, birds, even insects, they all leave their mark on the sand. Some took a bit of detective works to figure out. Beautiful looping squiggles and spirals I found after a bit of probing with a grass stem were caused by a tiny arthropod that looked like the pill bugs back home. Cones were deadly traps for tiny insects made by ant lions  Even the plants make tracks here. The tough sea oats and other grasses bend in the ever present wind and draw in the sand. Like nothing more than the spirographs we played with as children producing those strange yet beautiful patterns known as hypotrochoids. A hypotrochoid is a pattern generated by a fixed point on a circle rolling inside a fixed circle. Like those plastic circles of the spirograph. Or in my imagination, already sensitized by the heat and a bit too much crawfish gumbo for lunch, the patterns drawn in the sands by wind, the stems of plants and the whimsy of mother nature... 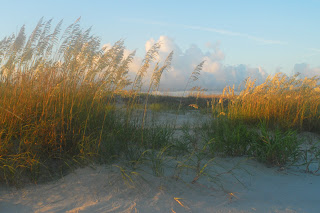 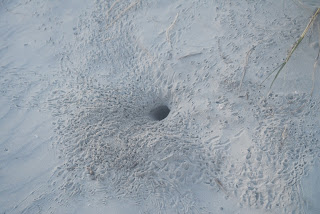 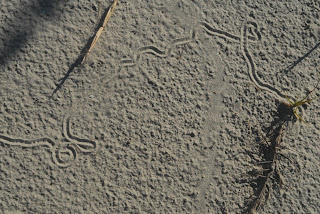 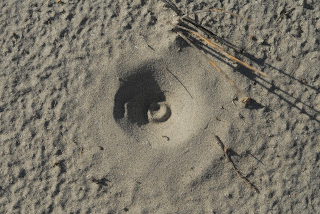 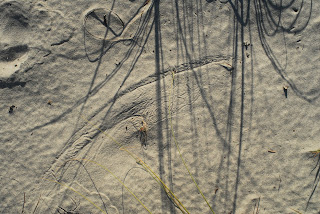 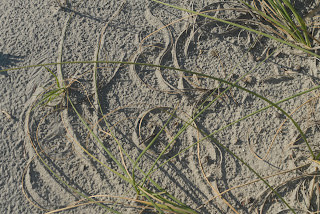 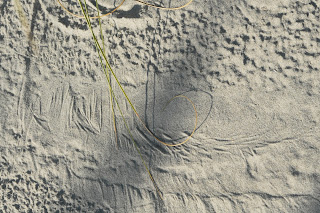 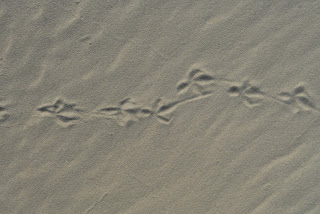 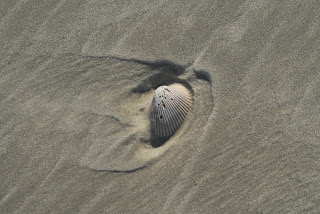 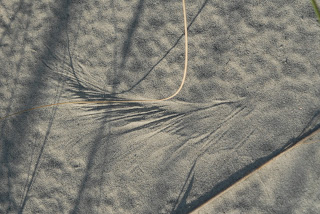 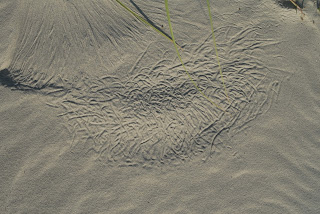 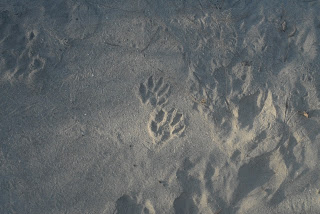 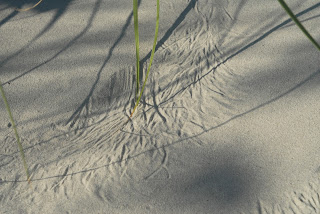 Posted by thatoneoldguy at 8:43 PM No comments:

Spent some time fishing where some clear water met up with some very very muddy water. It was a fish magnet for schooling fish. Several times I would actually get wet when schooling white bass hit the bait right around me. It was an awesome day, I guess I must have caught 50 fish in just a few hours,
Posted by thatoneoldguy at 11:23 AM No comments:

Holy Cow, what a day!

The day before I'd done a little recon. My river was up a bit but still fishable and I'd caught a decent smallie to boot.

It was the first in a couple weeks and I was dying for more so I took a personal day today and went fishing in a big way, from daylight till dark. Right at daylight I hooked a decent smallie which jumped and threw the hook. And then... Nothing no smallie action whatsoever. I fished a place where in the past I'd tangled with big smallies often. Zilch. I landed the yak on a small island and walked across. Off the other side two fawns launched themselves into the stream and swam for shore. Here the water was very swift and they soon came up against an entire tree in the water blocking their way. The first fawn lunged against the trunk a couple times and then was over and soon on shore. The second struggled seemingly unable to get over the tree trunk. It struggled for several minutes and I looked for a way across to help it. But the water was way too swift and neck deep between us. Just when I thought the little fawn was not going to make it hooked it's front two legs over the log and struggled over and on to shore. I fished for a bit longer with only a couple channels to show for it and decided to move.

The next location was a steep nearly vertical bank of big rocks that gets hit by a strong current. It's always been a reliable place to catch stripey fish. By now it was raining pretty good and this seemed to turn the fish on. Every few minutes a wiper would savagely slam my clear with silver glitter grub.

And right in the middle of the stripey feeding frenzy I caught a huge river crappie.

Finally the action slowed and soaked to the skin I decided to dry off and change location once more. Paddling back to the truck I surprised a family of wood ducks. I was surprised to see these guys still not feathered out. Maybe the first nest had been broken up by a predator and this was the second try. The little ones scattered under overhanging trees while mommy duck swam ten feet from the yak beating the water doing the broken wing imitation to draw my attention from her babies. Very cool.

I decided to make a big move and go to spot I knew on the Whitewater. Which today was anything but whitewater. It was blown out and a red muddy color with zero visibility. But It hadn't rained that much here. It must have really downpoured way up in Indiana but here the creeks were all an okay color. which sets up one of the great fish traps of all time. I found where a pretty good flow of clear water met the ugly water of the main river. And the river fish were stacked up in the clear calmer water. I caught four small bass, a bunch of wipers and white bass and big old stud of a saugeye. All standing in one place casting to a spot no bigger than my living room.

What a day from 6am to 8pm, most of it in the rain, I saw some great wildlife, landed some bass, some white bass, some channel cats, a fish ohio crappie, a fish ohio saugeye, and somewhere around 20 stream wipers! It'll be a while before I have another day to top that one. I don't think I'll have any trouble falling asleep tonight...
Posted by thatoneoldguy at 8:26 PM No comments:

Slipped out for a bit this weekend before and after all the chicken grilling, grandkid chasing, firework exploding and general mayhem of the 4th. First up was a trip to bluegill heaven. What an interesting place, it takes like 20 minutes even with waxworms or a foam spider to get a bite but it's worth it. Like I'd said before in other posts the place seems overrun with tiny bass and I think the vast majority of gills get eaten up. Those that live long enough to be to big for the bass to eat then have the bluegill version of Old Country Buffet set out before them every night. This big tub was the best. 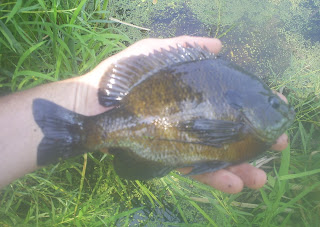 Then last night after all the festivities I slipped out with the float tube for a couple hours at a pond at one of the local wildlife areas. I caught a couple small bass on an unweighted plastic worm. Just before dark I caught a better one. No giant but he was a jumper circling the tube and jumping clear of the water twice as well as numerous head shakes. Its a blast trying to land decent fish out of the float tube, I usually end up with a face full of water at least once. 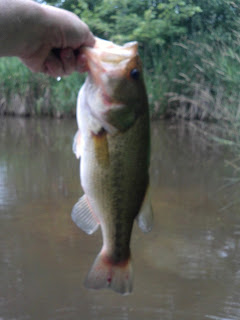 Posted by thatoneoldguy at 8:06 AM No comments:

It was a little pond, about a cast and half across about anywhere. And just a simmering stew of life. Moss, duck weed, cattails, all working alive with creeping, swimming and flying things. Pretty much impossible to fish from shore, I broke my way thru the cattails and settled into my tube. About every ten minutes a small 8 or 10 inch bass would jump clear of the water like it was trying to capture on of the hundreds of dragonflies skimming over the surface. All those tiny bass were why I was here. Not to catch them but because most ponds chock full of tiny bass have huge bluegill. Afloat out here in the middle there was room to cast the little four weight. I fished a small deer hair bug in the holes in the duckweed. It turned out the gills wanted the bug to just lie there where they would inspect it for seemingly forever before finally slurping it down. And they didn't disappoint, held in the hand the tails would lap up on my wrist on every fish. I just wish I'd brought a change of clothes. I spread out my rain poncho to sit on during the drive home but still smelled like a bucket of mud... 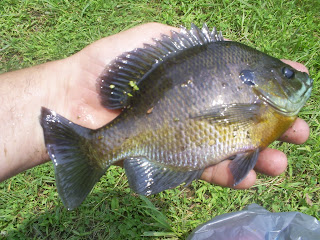 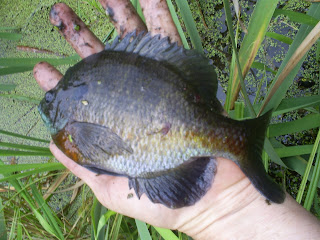 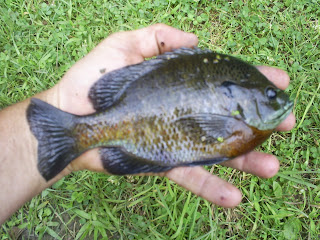 Posted by thatoneoldguy at 11:13 PM No comments: