Feel free to use 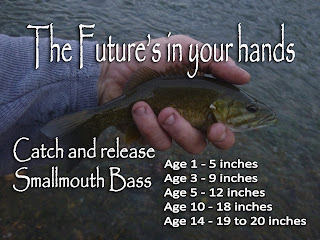 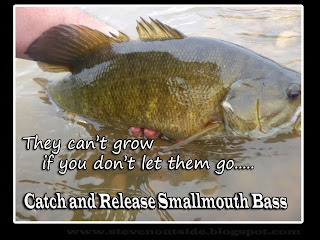 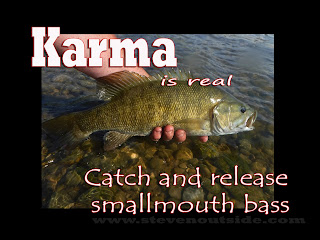 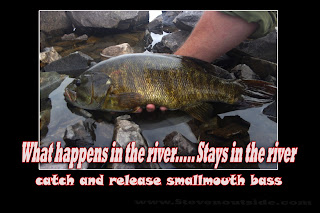 Posted by thatoneoldguy at 7:12 PM No comments:

Caught a couple smallmouth this evening after work. They were in the mouth of what is basically a pretty big ditch that runs into one of our small rivers here in southern Ohio. The water I'm guessing was just a bit warmer than the river. Nothing too huge but this time of year any smallmouth is a good one in my book. On a 1/16th ounce jighead and a curly swim. 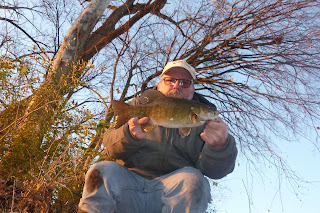 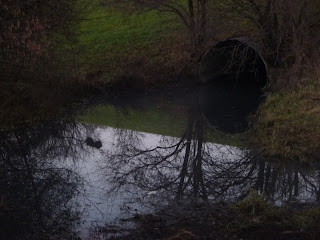 Posted by thatoneoldguy at 5:48 PM No comments:

Warming up to cold weather

So I've found this awesome new website. It's an Ohio EPA site and you select a county from a dropdown menu and a map pops up showing you the location of everywhere in that county that has a permit to discharge water. Which (combined with some good old fashioned legwork) you can then use to find places that put out warm water. Or at least water that is warmer than the low forty degree water that most of our streams have flowing in them now. Right now fifty degree water can draw fish. The first day I checked out a pipe that was spitting out just a little bit of water. Maybe a couple garden hoses worth but it was very warm. I was hoping for some nice smallmouth from this location but no go. One smallie maybe ten inches long but two channel cats and a shovelhead hit my grub as well. The second place put out more water and I caught a few nice stripey fish. Very cool to be finding new fishing holes this time of year. The website if you are interested is http://wwwapp.epa.ohio.gov/dsw/gis/npdes/index.php 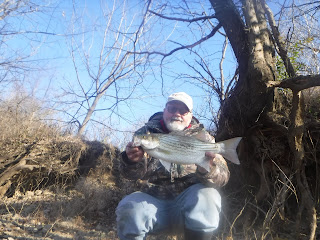 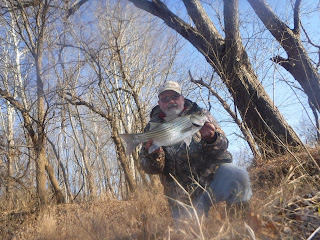 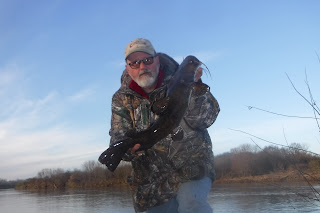 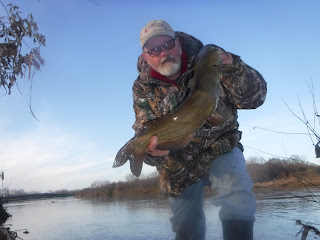 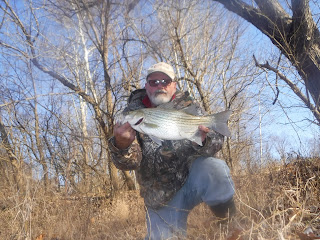 Posted by thatoneoldguy at 3:54 PM No comments:

He was more than a little obsessive compulsive. He knew this. This was one of his greatest weaknesses but also his greatest strength. He could get stuck on something and doggedly follow it till the ends of the earth. And he channeled much of this into fishing. Stream smallmouth fishing in particular. At any other kind of fishing he was probably just a bit above average as you would have to be just from having spent so much time on the water. But when it came to fishing for smallmouth bass in a river he was a different person. A man obsessed. He studied everything he could find on the subject, not just the how to's in the fishing literature but deeper. Scientific studies on the baitfish in the river, tracking studies of smallmouth movements, their physiology, the hydrodynamics of the flowing water in the river, anything he thought might help in his quest to catch bigger fish. He developed theories on all these things, refined them, discarding them for new ones. And he began to catch very big fish. In a part of the world where catching a twenty inch smallmouth is a once in a lifetime experience he began to catch several a year. Till, afraid people would consider him a liar, when he posted a photo of a really big smallmouth online he began to sometimes not list the length. Better to have people think a fish was smaller than it was than think him a liar. All the time trying to catch the fish, a fish like the James Bayless smallmouth bass caught out of the Mad River in 1941. That seven and a half pound fish was twenty four inches long and stood as the state record for fifty one years. As far as as he was concerned it was still the record. The current record was caught in Lake Erie and was as far removed from river fishing as you can get.

All of this had over the course of several years led him here. Here was a small pipe that dumped a bit of water into the river. He had found it by researching who had EPA permits to dump water into the river. The company's permit said it was used to cool machinery and dumped nothing but warm cooling water into the river. Just downstream out in front of some old tiles and lots of concrete rubble was a small hole, maybe twenty feet across. The hole was seemingly dug in the distant past instead of formed by the river since it was out of the main current. It wasn't much to look at really but the place bothered him a lot. He had found it in late spring and it came to mind often that summer as he thought about the coming fall and winter. It was on a mostly unfished section of river which meant everything when searching for big smallmouth since it took well over a decade to grow a big one. And it looked nothing like a classic wintering hole was supposed to look like but it had everything a wintering smallmouth could want, and it had that trickle of warm water. Like I said it bothered him a lot.

That fall he was there right around the time of the autumnal equinox, when big fish begin to move towards where they are going to spend the winter. A nineteen inch smallmouth and two around eighteen in two trips from the fast water just below convinced him here was something special. But the weather was very warm and he was consistently catching big smallmouth out of some spots closer to home so he left the place alone till the water cooled. Fast forward a bit over a month and the river had cooled to the lower fifties. A few degrees cooler than the water coming out of the pipe. It was a perfect day for fishing. Overcast and dark, threatening to break out into rain but never doing it, the air temperature was in the low sixties. A three inch grub produced two wonderful fish right on the edge of the hole where the current from the pipe and the river current ran into each other in a slowly revolving spiral. One fish was a bit over nineteen and one was exactly twenty inches and fat and deep. The twenty incher almost looked short it was so fat, like a giant bluegill. It was beautiful.

The next day was completely different. The air temperature struggled to reach forty and it was bright and sunny and windy. In other words terrible fishing conditions. Two hours later he hadn't had a bite. Swimbaits, suspending minnow plugs, grubs, even a hair jig under a float had failed to produce anything remotely resembling a bite. It was getting a bit towards evening and the wind laid a little bit but the air was even cooler now. He tied on a buzzbait, thinking I hope no one sees me doing this. Two casts in and a fish swirls all over the lure without getting hooked. He throws right back and promptly hooks a pretty fish that probably went eighteen or nineteen inches. Probably, since it came off after a few seconds. The river was crystal clear, as clear really as it ever gets. He cast the lure a few more minutes with no results. A buzzbait had proven itself so many times over the years to be a big fish producer that he consciously had to make himself change to something else sometimes. Just five more casts he told himself.

On the fourth the buzzbait caught the current coming out of the pipe and he could almost hold it in place reeling it so very slowly as it gurgled on top. Finally the lure was maybe five feet out and he began to lift it out over a bit of weeds when the fish came. It wanted the buzzbait so badly that its entire back came out of the water like a porpoise. It took a long time for its whole body to do that and he got a good look at it in the clear water. It was just like the moment in The Old Man and the Sea when the fisherman gets his first look at the fish and thinks, "no, he can't be that big". But it was. And it completely missed the buzzbait being lifted from the water. If you have ever fished a buzzbait you know if you can get it back out there quick enough many times the fish will hit again.

This fish didn't, it was just gone. But he had seen it clearly in that split second it had tried to eat his lure. He had landed big catfish, muskie, trophy northerns. Nothing had affected him like this. His heart had pounded in those first few seconds after the fish like a hunters upon seeing a big buck. Here was a man who had seen, caught, and handled a lot of really big smallmouth and this fish shook him to the core.

To a man who leans toward the obsessive dangling the object of his obsession right there in front of him then yanking it away is the worst kind of torture. Hours, days passed and the experience of the fish was still fresh and raw. He secretly named the fish BOAT, for biggest of all time. Certainly not everywhere of course, no river is going to compete with Dale Hollow or St Clair. But for here in his fishing world of rivers and streams this fish certainly was the BOAT. The winter passed with no more sign from the fish. He didn't need one he knew it was there. He finally had to force himself to fish other places. Other wintering holes. Fish were caught big fish but not the fish.

Now another winter approaches. He's made himself a promise that he will at most only spend a third of his time chasing the BOAT. But the fish is still out there. Big smallmouth live for a very long time and they overwinter in the same place every year. For the next several years he knows there is still a chance. The BOAT is still out there and so is he...

Posted by thatoneoldguy at 6:57 PM No comments:

Posted by thatoneoldguy at 3:57 PM No comments:

Big girls out in the cold

After being gone for a few days down south chasing stripey fish I figured I'd better go check on my smallmouth. ( the striper fishing was okay but also the classic "you should have been here last week" ) Turns out the rivers had dropped and cleared up around here in Southern Ohio a whole bunch while I was gone. I started out with what has become my go to smallmouth bait, Vic's new ribeye swimbait but it was a no go. I changed to the clear with gold glitter three inch grub. 24k I think Dave France calls it and it was game on. I caught a pretty fish probably 18.5 or 19 inches and was texting my buddy Rob, "lookie what I caught" all thrilled with it for mid november. Little did I know on the next cast I would catch it's Mom. I don't know if it was the cold or just the excitement of catching such a pretty fish this time of year but I found myself shaking a bit messing with the camera. 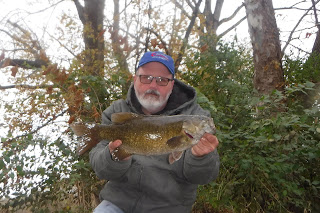 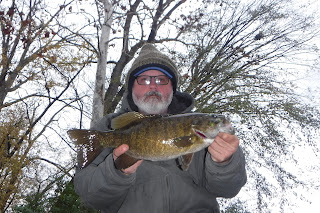 Posted by thatoneoldguy at 2:54 PM No comments:

Ran away for a long weekend on Watts Bar and Ft Loudon chasing stripey things. Had to work real hard for them but managed a few. Also managed to lose a nice muskie too... 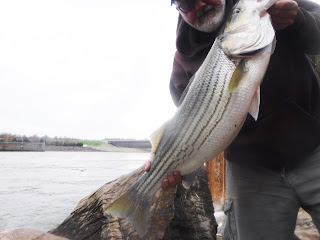 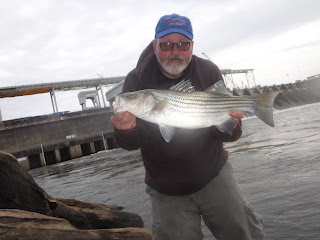 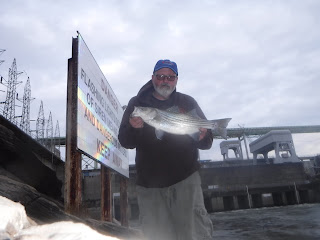 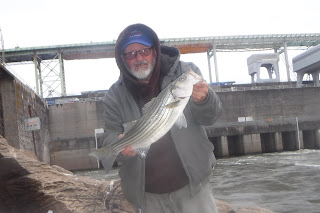 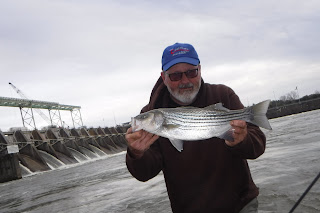 Posted by thatoneoldguy at 11:00 PM No comments:

One of the perks of sauger fishing on the Ohio River is that even when it's really slow like tonight you never know when you might accidentally hook a river monster like this pinocchio fish. A half hour later, I snapped a few photos, worked the fish back and forth a bit till it was ready to swim off and headed home dog tired. Not sure who was more whipped me or the fish 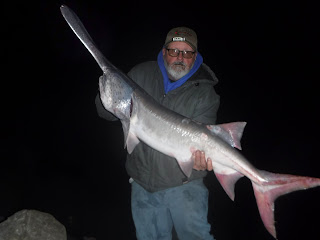 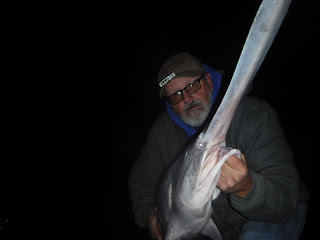 Posted by thatoneoldguy at 8:28 PM No comments: