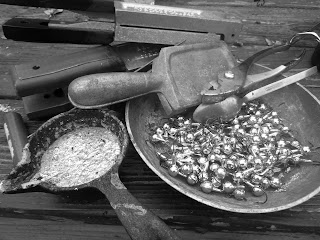 Posted by thatoneoldguy at 3:17 PM No comments:

Something else to do while waiting for the Winter That Never Ends to finally be over. Kind of a skirted jig-tube-grub love child, the GRUBE...
Ones a crawfish imitation that isn't too big for river smallmouth like most crayfish imitations and the other a darter imitation with pec fins that have a bit of orange. 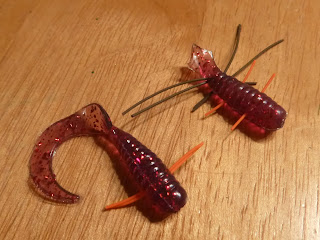 Easy to make with some rubber skirt material and some grubs. Use a jig head like a crochet needle, poking it thru the grub, hooking the rubber with the barb and pulling it back thru the body. 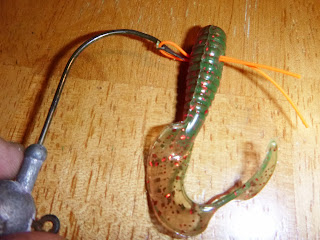 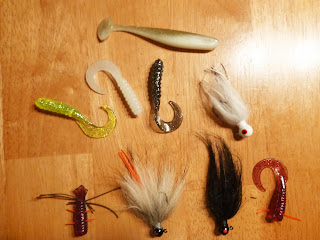 Pretty close to the average assortment of stuff you can fish on a jighead that ill carry in my wading pack...

Several kinds and sizes of hair jigs. (this year there will be a lot of kinds and sizes, its been a long winter and Ive tied a few hundred). Motoroil with red flake grubs made into darter and crayfish imitations. Chartruese, smoke metalflake and glow colored grubs. (The glow is just a great daytime color I don't carry it because it glows in the dark even though it does. Sort of a more natural version of white) And a color or two of shad bodies swim baits to imitate shiners.
Posted by thatoneoldguy at 4:44 PM No comments:

Years and years ago my brother and I spent a day fishing in the rain. We stopped in Angelo's Pizza in Morrow to dry out and get something to eat. The lady took our order then said, "You guys been fishing?" "yep." "I thought so, you smelled like it"

Well one day I decided to join the ohiogamefishing forum. We had just been talking of that day long ago and I made my handle Oldstinkyguy. A decision I would come to regret. For you see OGF is huge. 48,000 thousand members that post plus a legion of guys that just come there to read fishing reports. In the dead of winter there may be 500 or 600 people on at once, in summer thousands. Tons of great fishing information. Probably dominated just a bit by Lake Erie because, well because Lake Erie is just so good.

So I began to post my little fishing reports. On wading streams for smallmouth or catching shovelheads at night. I'd tell how many deer I saw, what birds were around. Lots of photos. If you've read my blog you know the drill. I think I struck a cord with the guys that only got Erie every now and again or never, that didn't own a $20000 boat but still loved to fish, loved the outdoors.

A couple times I'd be out fishing and someone would say aren't you Oldstinkyguy. Dave, the guy I fish with all the time said I'd better start watching who could see me park where to go fishing, that I was getting famous. Never in a million years did I take him serious.

Well at the end of January every year OGF has an Angler Of The Year contest. First they take nominations, then people can vote for ten days. I was nominated, then renominated, then again till the moderator told people to stop. A couple dozen guys were chosen. Several fantastic fishermen. Charter boat captains and guides. And this good old boy who caught smallmouth wading creeks and wrote stories about it.

Long story short. I won. Oldstinkyguy. By the largest margin in the contests history. There's a lot more of us out there than you might think. Guys that stop at the river on the way to and from work. Guys that care as much about seeing a beaver or a deer as catching fish (well almost as much). It's nice to know sometimes that people do read what I put out there. That the world of fishing and the outdoors is bigger than what they are selling in the magazines and on TV. Hopefully in my small way I'm making a difference. Getting a kid out from in front of his playstation and into the water. Getting a dad to just once in a while skip the local tournament to spend the day floating a river in an old canoe. Falling in love with nature as well as fishing. At least I like to think so. Or hope so...
Posted by thatoneoldguy at 4:02 PM No comments:

I started out early. Fishing where the warm water of a water treatment plant dumps into the river. Too early, I like to froze to death. The radio driving in said it was 13 degrees. It felt worse. After about ten minutes I had a fish on for a second then off. Then a half hour later caught a nice five or six pound buffalo... 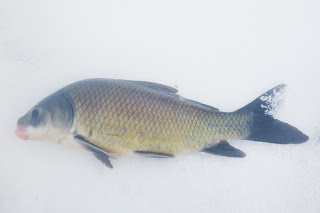 ...right in the dorsal so he could pull like he had a harness on. It was nice though to have a fish take drag after the last few frigid weeks.

then came the cool part. Downriver I could see two big raptors. A bit too far away to give an ID but close enough to have a great view. One would swoop down at the other and the one being bombed would roll over on its back midair. For a second or two they would lock talons and then tumble towards earth before breaking their grasp and pulling out of the fall. Then went downstream out of sight then back up even with me before finally going back downstream out of sight. The whole time diving and chasing. I guess love is in the air. 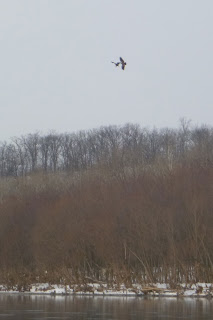 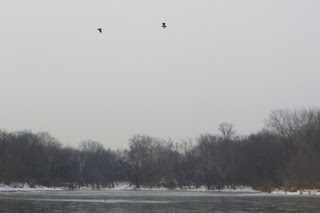 A bit later I found some muddy mink tracks on the ice crusted snow. 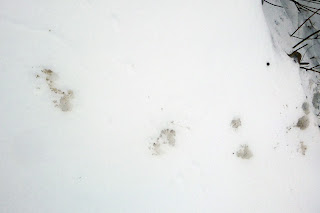 Then Greg called wanting to know if I could meet him at a wildlife area to ice fish. It was a bit of a drive from where I was at but I instantly said yes. I could thaw out on the drive. By the time I got some waxworms and made the drive to meet Greg it had warmed up to the balmy mid-20's. Which seems to be as warm as it gets any more. The wildlife area was deserted and quiet and beautiful. 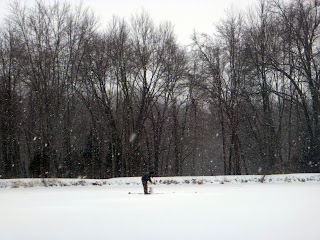 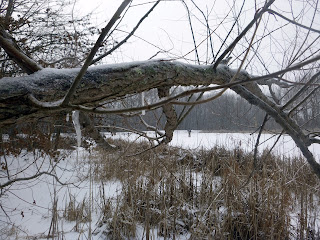 Greg stationed himself between two holes and with an ice rod in each hand put on quite a show pulling in one gill after another. We didn't catch any monsters just average sized ones but I guess we must have caught 50. We didn't see any one all day but two guys out after rabbits. A very nice trip considering the earth has obviously moved on it's axis and the north pole is now somewhere close to Dayton.
Posted by thatoneoldguy at 7:02 PM 1 comment:

Saturday was the big fly fishing show and then Sunday I had to meet Dave and Greg for some fishing. Well I'd been rushing around getting ready for the show and hadn't really put any thought into getting ready to fish. But we weren't fishing till 11, plenty of time. My wife said after I'd passed her perch on the couch about a dozen times, "a bit disorganized this morning?". I'd rigged up a cool (I thought) little ice fishing rod out of an old cork handle from one old rod and the broken tip of another. But the tip section wouldn't quite fit into the handle. I had to sand it down just a smidge. Better remember to check that before I go. Well I couldn't find the spud bar. How do you lose something like that? Really? Only took an hour to find it and now I'm running close on time so off I go. I roll into our meeting place at exactly the right time and we head out to the pond. A good six inches of ice. But between Greg's auger and my newly found spud bar we soon had several holes open and were lowering waxworms in. I get a bite and whack I set the hook. Without ever checking the new joint on the little ice rod I'd made. I snapped it off right at the joint and had to hand over hand in a pretty gill. Im holding it admiring the colors and Dave says with perfectly deadpan delivery "so big he broke your rod wasn't he". Luckily Greg had a bucket full of gear that was bristling with little ice rods sticking out like antennae at the old Voice of America station. As badly prepared as I was Greg was well prepared and soon I was back fishing. He even had little zip lock bags full of deer jerky and deer baloney to snack on. He needs to start an ice fishing guide business. I wouldn't say the fishing was fast and furious but it was steady and a couple times we all three had fish on at once. Okay this ice fishing thing is pretty cool. If its going to be miserable and cold I can do this for a couple weeks... after I perfect this cool little ice fishing rod idea I have... 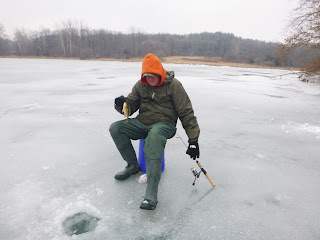 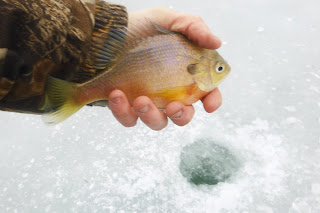 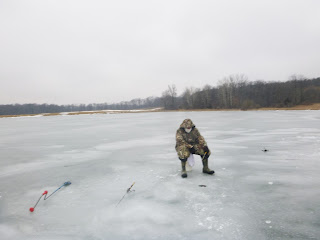 Posted by thatoneoldguy at 1:59 AM No comments: