She wasn't quite a 20 incher...but she didn't miss by much. This freaky warm weather combined with low clear water has made for some epic fishing. Today would have been a pretty good day on Lake Erie much less a fair to midling river in Southern Ohio. I guess I probably caught 20 with several more close to the ones in the photos. All on a pearl with blue back curly shad fished in the eddy seam of the first riffle right above a wintering hole. 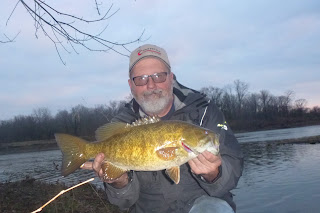 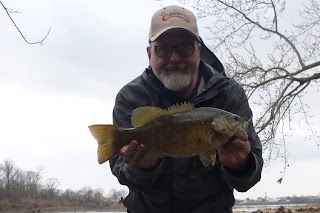 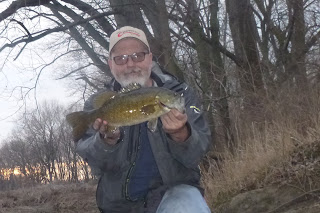 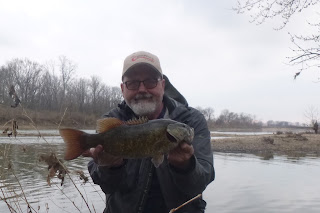 Posted by thatoneoldguy at 4:24 PM No comments:

With the truck in the shop and some chores to do at home made a short but sweet trip close to home. Nothing too huge but good numbers today. On a clear with glitter curly shad fished in some pretty fast current for the first time since november. Things are getting ready to really bust loose in a couple days 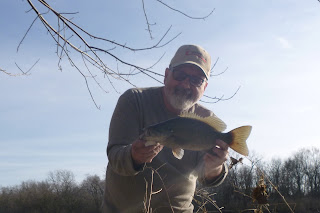 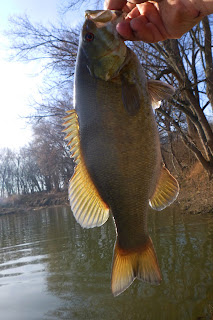 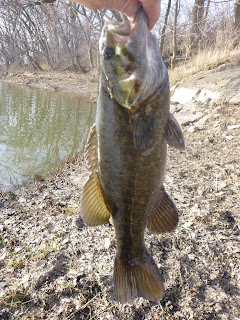 Posted by thatoneoldguy at 6:53 PM No comments:

I guess I was in my teens when I first met Dan Gapen. It was at the Cincy sport boat and travel show back in the day when there was still a lot of fishing tackle there. He autographed one of his books for me which I still have to this day. For those of you not so old like me you might be wondering who is this Dan Gapen fellow anyways. Well let me tell you for decades Dan was known as the River Rat. He traveled all over the United States fishing river after river for pretty much anything that swims and writing about it. I think it's safe to say that he has forgotten more about river fishing than us mere mortals will ever know.
Dan's grandfather Jesse built a huge log resort in northeastern Minnesota which people flocked to from all over. His grandfather was also one of the first people to stock smallmouth in these waters which have now become possibly the best smallie fishing on earth. Well Dan's dad decided to strike out on his own and bought a resort on the Nipigon River. When Dan was just a boy he worked in the lodge and was "bait boy" till he began guiding at the ripe old age of 14 on the Nipigon River taught by the native Ojibwa Indian Guides  It was here that Don Gapen created the world famous muddler minnow one of the world's most recognizable fly patterns. Dan learned to tie at six and by age 8 was turning out flies to sell at the lodge. He received 1/2 cent a fly. It was also here on the Nipigon that the Gapens created the first weight forward spinner that would end up morphing into the famous Erie Dearie type lures. Dan started the Gapen Bait Company which he is still CEO of. Dan also in 1964 created the baitwalking sinker which has also morphed into a million different versions used to catch nearly everything that swims. And in 1964 he created the ugly bug, a soft plastic and rubber legged lure on a jighead, again a lure that has morphed into a million different styles that pretty much dominate river fishing today. Dan wrote extensively on various river fishing techniques and in his homespun way covered some very complicated subjects in a way that made sense. I think in one book I own there must be twenty pages alone on all the various styles of just wingdams and how to fish them. In another he covers vertical jigging with blade baits in rivers which is all the rage now in modern river fishing. And thru it all and over the years his enthusiasm hasn't diminished. Last week at the Columbus Fishing Expo he was all excited showing me underwater video of redhorse suckers striking his companies latest fly. He then gave me two. One of which will be put up unopened as a personal momento of one of fishing's legends. 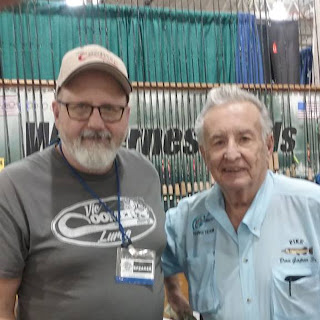 Posted by thatoneoldguy at 6:51 PM No comments:

So let me tell you a little story...

Last week my truck started making horrific noises as I downshifted or accelerated. Horrific, I'm not driving it another foot noises. Bummer So I call a tow truck.Two hours later no tow truck. Bummer. I call them. "We are so sorry, a hydraulic line broke on the truck we will pick it up first thing in the morning". Bummer but OK. No call,no show. Bummer. Eagle towing BTW don't ever use them. So I call, no answer. Eagle towing BTW. I get off work call, leave another message. No answer. Eagle towing BTW. I call someone else they tow the truck to the shop. "Sir your roadside assistance only covers a tow of five miles you will owe the rest". Bummer. I drop off info and keys and go to fishing expo for three days. I get back, give them a day and don't hear from them. Bummer. I call. Well it turns out the owner has had a heart attack! and we "are not sure when we will get to your truck but we are so sorry". Understandable but still a bummer.So last night I go drop off unsold merchandise from the expo. Right by the river so I put a bit of stuff in the borrowed truck and fish a bit. Then today at work, in broad daylight, somebody breaks into three or four cars at work. Stealing the stereo out of the dash out of the truck I've borrowed so I'll have to replace that. My waterproof camera I love. my bulletproof winter hunting and fishing parka, my rod and reel, a small bag of tackle and my rubber boots! In broad daylight!!! Out in front of work!! Bummer.So by the time you total up a stereo, towing, whats probably going to be hugely expensive repair bill, my camera and some reasonably mid to high end outdoor gear I guess I'm going to end up out two or three thousand bucks for the last week. Bummer. I've had better stretches of luck....
Posted by thatoneoldguy at 1:17 PM No comments:

Got out for a bit this evening. Fishing as slow as I could thru an eddy with a small clear with silver glitter curly shad and managed a few decent smallies. 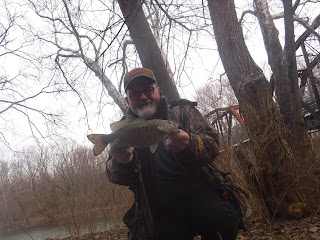 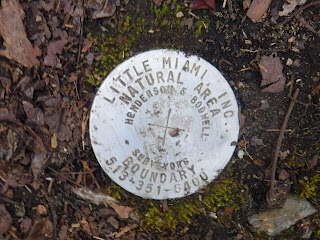 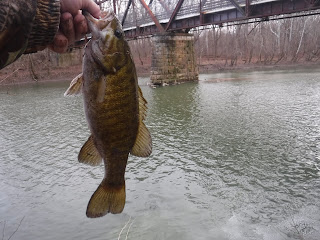 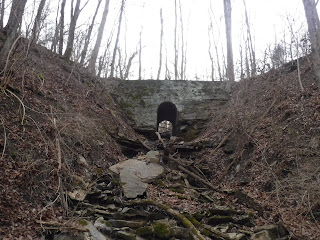 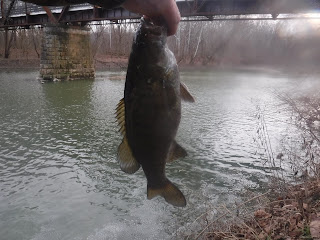 Posted by thatoneoldguy at 5:36 PM No comments:

I wanted to put out there that while you are at the Columbus Fishing Expo you can pick up something cool for your little fishing buddy. The Little Miami Conservancy has put out an excellent children's book. Instead of about dragons or fairies or something made up this one features characters based on wildlife that actually live in our rivers. Small Fry Sonny, an baby smallmouth bass, is swept downstream during a spring storm and carried far from his home and friends at Bass Island Bar. Sonny encounters danger along the way and gets help from several river critters in finding his way back upstream to home. Beautifully written by Bill Schroeder and cleverly illustrated by artist James Billiter, this book offers early readers an appreciation of conservation and river ecology. We will be selling the book for ten dollars in our booth at the show. I know my granddaughter loved it and you will be helping promote a cause dear to my heart, river conservation. And it is the only children's book I know that teaches your kids something about the fish and animals we have around here in our rivers. 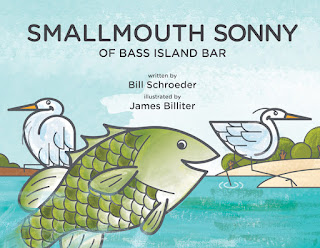 Posted by thatoneoldguy at 2:22 PM No comments: 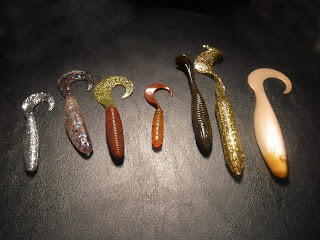 So I'm pretty excited about my involvement with this years Columbus Fishing Expo. First off it's going to be HUUUUGE, like 155,000 square feet of tackle and gear. And this year Vic and I have a booth like 4 times bigger than last year. Friday Vic will be giving away a sample pack of lures to the first one thousand people in the door. And at 5pm I'll be giving seminar on river fishing and on using soft plastics in rivers and streams at stage D. And I'm really excited about Saturday because I'll be following on stage D Steve Quinn, yep Freshwater Fishing Hall of Famer Steve Quinn of In-fisherman fame. He talks at noon and I'll be on at 1pm. And then Sunday I'll start off the seminars at 11am and be the warm up act on stage D for Steve Quinn. So I'm super excited about all of that. With the bigger booth we will have more room for everyone so It won't be as congested as last year and hopefully there will be room to do a lot more fish talking in the booth. If you want to go to a fishing expo that is still a FISHING show then this is the one for you. I was like a kid in a candy store last year looking at all the latest tackle. And the fishing seminars go non stop with everyone from the legendary Roland Martin, the latest top pros, top fly fishermen, and all around fishermen and top catfishermen like Ohio's own Mark Blauvelt. 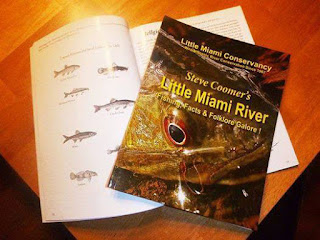 Posted by thatoneoldguy at 4:29 PM No comments:

The Homeless Piano Bar and Grill...

You know when you find a unicorn AND a piano it's been an interesting week's fishing. Lot's of camo fish with teeth on three inch grubs mostly... 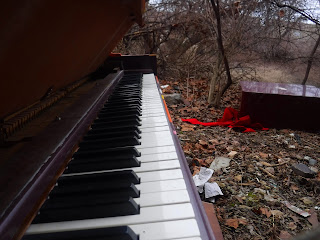 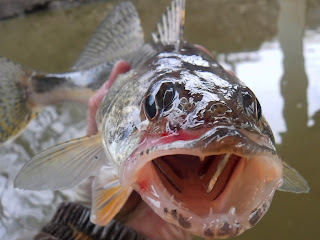 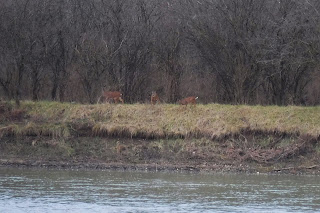 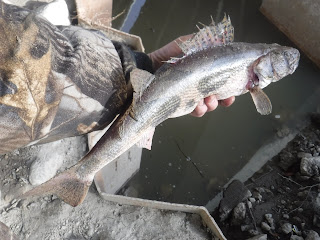 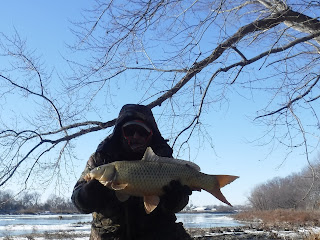 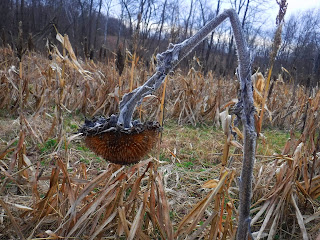 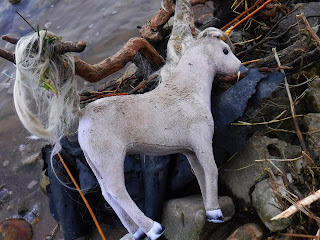 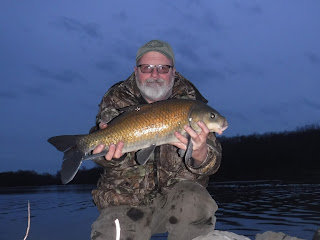 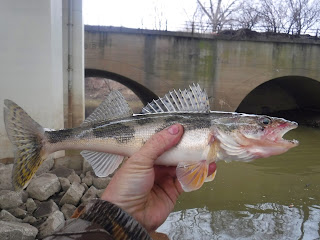 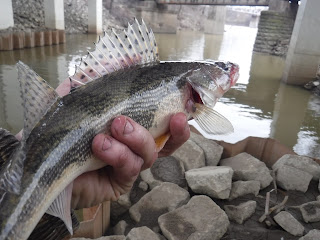 Posted by thatoneoldguy at 5:42 PM No comments: