Channeled my inner Graeme from the Totally Awesome Fishing Show tonight and caught a couple dandy carp and a channel cat on bread. A week or so ago I came upon a plant putting some warm water into the river. It was way too shallow to hold winter smallmouth but there were some big carp ghosting around. So tonight I went back with some bread pinched on a hook and nothing else. Just stalking fish and swinging the bait out in front of them underhand. Loads of fun. 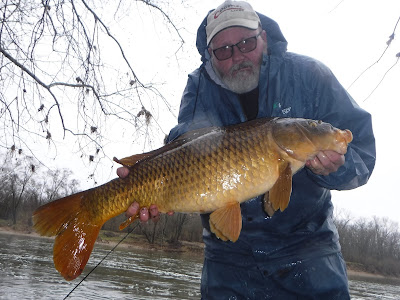 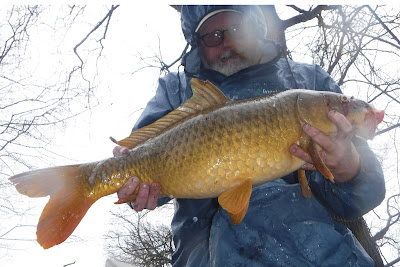 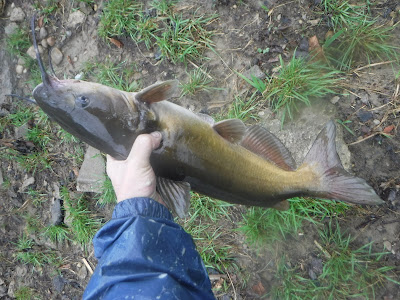 Posted by thatoneoldguy at 5:51 PM No comments:

A nice warm rain. Hopefully it won't blow the rivers out too bad, but this warmer weather does have the fish a bit more active. But still in their wintertime haunts, at least the better fish I've been catching lately. I guess I've sounded a bit like a broken record. The upper end of a wintering hole right next to current over a hard bottom. I probably have some version of that sentence in the last half dozen smallie reports. Hopefully in a week or so that won't be the case any longer. As soon as they leave their wintering holes early-season smallies will be looking for two things, slower current and warmer water. So leave the riffles, runs and midriver pool locations alone, instead look for smallies at creek mouths which put warmer water in the river, below dams, in side channels and in eddies below islands. But like I said that's still a few days away, right now I'm still using the same tactics I have all winter, a light jighead and a curly swim fished slow, tonight I was using six pound test because of water clarity but with the rain if the rivers still fishable I'll probably be using eight next time. Any heavier than that makes throwing a light jighead too hard. Tonight's best fish was a pretty 18 that pulled like mule. 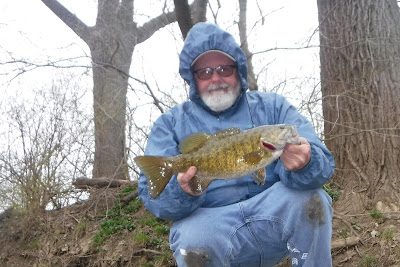 Posted by thatoneoldguy at 4:43 PM No comments:

Once in a while you just have to stop for a second and enjoy the moment and give a little thanks for the gifts we receive in this wonderful sport. So far this year there's probably been at least one slow trip for every good one. But even every slow trip has it's rewards. Sunsets and wildlife, anticipation and just not knowing what's going to happen next, a deer you jump walking out, the sound of the wind in the treetops. In winter you better be content with more rewards than just fish. But it can happen, it does happen, just enough to keep us going.
You would think early spring would be a reversal of late fall, with bass being in the same spots putting on the feedbag. Most years that isn't the case, we get a week of warm heavy rain and the rivers blow out at the same time they warm up. Then by the time the river is back down the fish have spread out and you miss that chance to fish over numbers of big fish at the same time. I've been saying to everyone that will listen lately that I was sure this week was going to be epic. Warming temperatures WITH a low river. I wasn't expecting this fish today though. Maybe later in the week or then again maybe never for a beauty like this. With one of those fat, full of eggs bellies you normally associate with largemouth instead of river smallmouth. I didn't fish too long afterward but I did sit on a big rock a while watching the river flow by for a bit before heading back to the truck.
Oh yeah, the fishing report part. In probably three foot of water in slack water right up against fast right on the upstream edge of a deep slow hole on a 1/8 ounce jighead with a curly swim fished slow and steady right off the bottom. 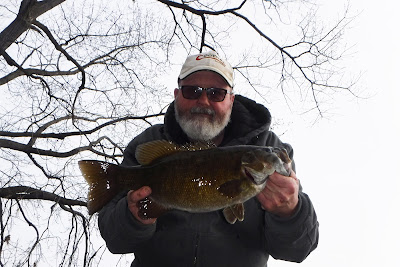 Posted by thatoneoldguy at 3:27 PM No comments:

Made a pit stop tonight on the way to set up for the fishing tackle show in Middletown tomorrow. Whacked em pretty good for the two hours I fished. With the forecast for next week showing every day solidly in the fifties I think things will really be busting out by the end of the week. Even though it's not been warm the fish were right at the edge of the hole where the current meets the slack water over a hard bottom. They are ready, just waiting for some warmth and not to be too anthropomorphic but I think the fish are ready for winter to be over as much as me. Tonight's fish were on a curly swim fished slow. 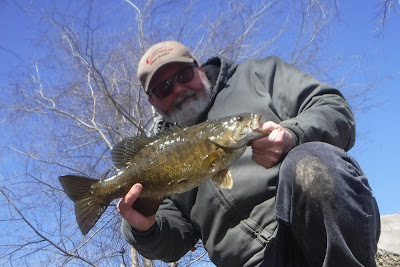 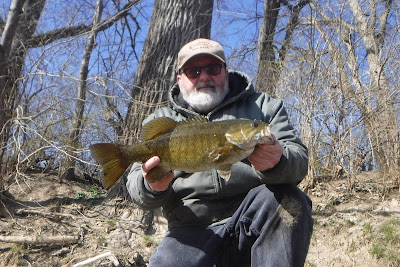 Posted by thatoneoldguy at 5:28 PM No comments: 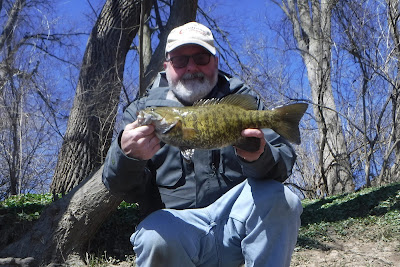 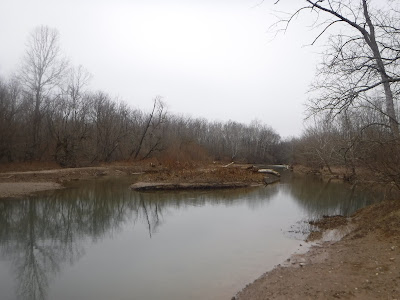 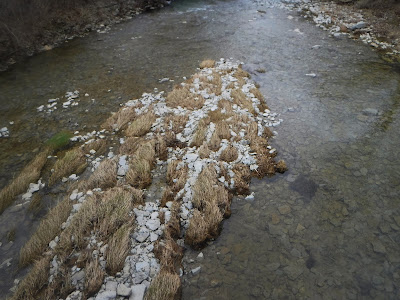 Posted by thatoneoldguy at 2:31 PM No comments:

It was bound to happen...

I love half price books. You never know what you will find. Last fall I got this book there, The Practical Guide to Successful FISHING. It's all about European style fishing. Those guys don't fish the way we do. It's all about bait fishing over there. There are chapters on making the perfect ground bait, and getting the perfect maggots to slingshot and boilie recipes. And they have huge pike, much bigger than our North American pike and there is a chapter on dying dead baits bright colors and fishing them for pike which is why I bought the book in the first place. You see I know this little stream and it has muskie in it and...well that's another story. And there is lots and lots on advanced float fishing. It's a weird read, I love it.
Then at the Columbus Fishing Expo, Dan Gapen and Bobber Anne were there selling the world's greatest floaters. Balsa painted with epoxy and fiberglass stems you could bend double without breaking but oh so delicate. So I bought some...
Then I kept running into carp feeding at warm water discharges as I fished them for other fish this winter. So here I ended up. A cup of cracked corn and mixed seed stolen from the backyard birdfeeders thrown out in the eddy of to one side of the pipe for chum. One of Gapen's slip lock floats weighted just right with shot so that if a carp just breathed on it the float would either slip underwater or rise up. The bait itself was a crust off the end of a loaf of bread from the bakery. (Believe it or not the book has like eight or nine photos on how to hook your bread just right.)
Ten minutes later a few bubbles, then a few minutes later a swirl. Then my float winked out of sight. Don't tell Jeff but his custom built rod makes a swell lightweight carp rod. Light enough to throw a float rig but big enough to whip a carp, well just big enough.
Anyways to make a long story short I caught three on a very cold day and had a blast doing it. 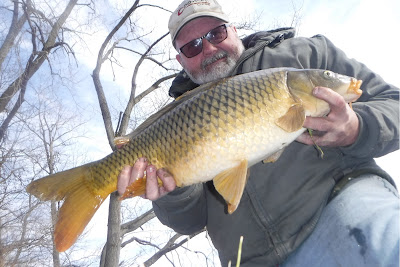 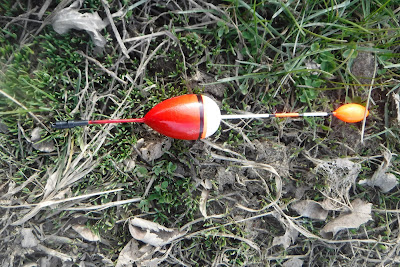 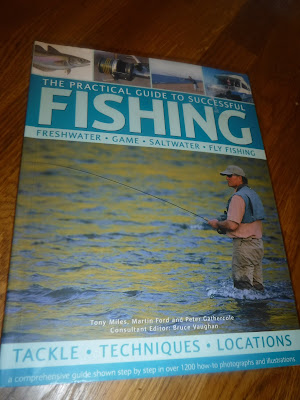 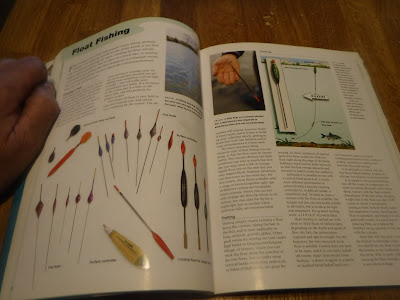 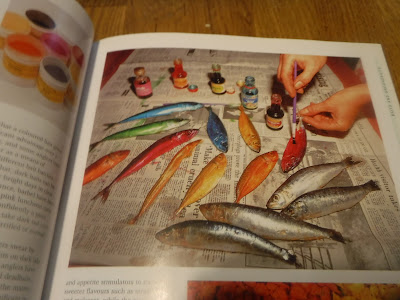 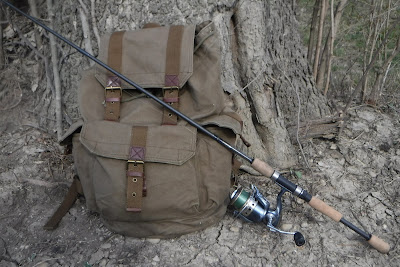 Posted by thatoneoldguy at 4:40 PM No comments:

Dreaming of the mountains 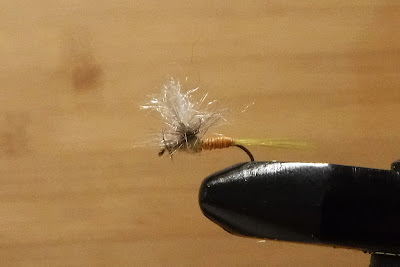 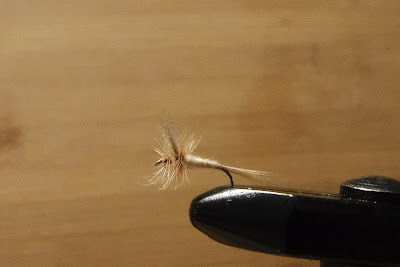 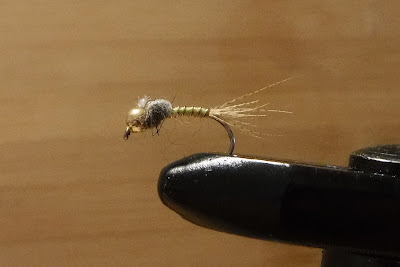 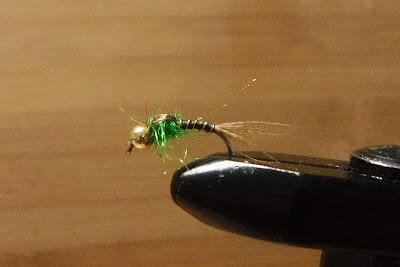 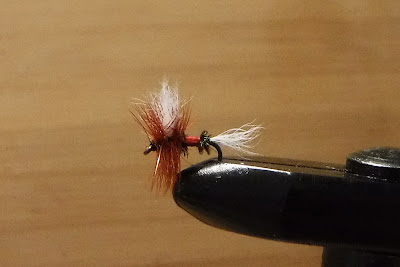 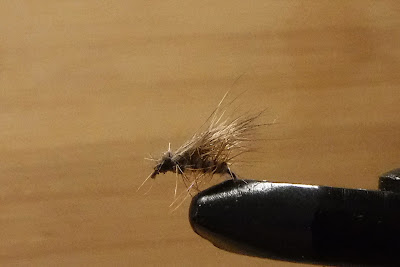 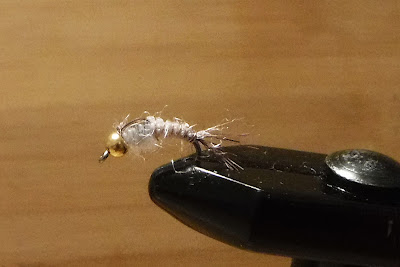 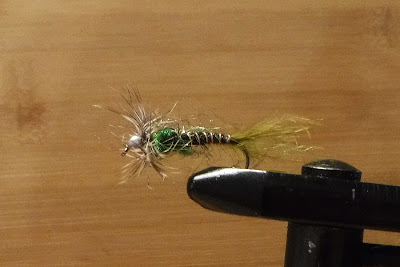 Posted by thatoneoldguy at 4:45 PM No comments:

froze off the water...

Things started out ok. It was somewhere in the low 40's and the sun was peeking out. Down over the bank out of the breeze it was almost comfortable. An hour later the wind had come up, temperature had dropped like a rock, the sky clouded over, little ice balls were hitting me and I was walking hard and fast back to the truck. But in between I'd managed to catch a nice smallmouth so I was happy. On the clear with gold flake grub (24K) on a 45 degree gravel bank that had been catching the sun right on the edge of a deep wintering hole. It's gotta be spring one of these days don't it???? 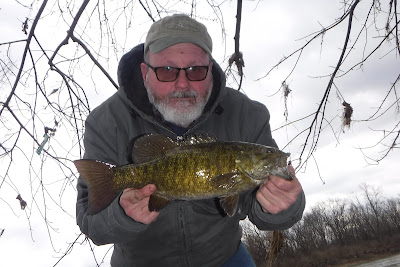 Posted by thatoneoldguy at 4:08 PM No comments: 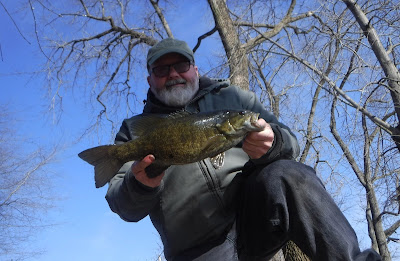 Just like the Staind song, It's been awhile. The river is still up just a little bit and a tiny bit off color but not bad on either front. I didn't take a water temp. After all it's been really cold and I'm sure the river has lost several degrees in the last week. But I'm going fishing anyways so no reason to demotivate myself and take it's temperature. I still had a chartreuse metalflake grub tied on from a skunking in a high muddy river a few days ago and it proved too irresistible to a dandy smallmouth on a 45 degree gravel bank that was catching the sun right on the edge of a wintering hole.

Posted by thatoneoldguy at 8:02 PM No comments:

Found this relic of an ancient civilization along the river today. These early inhabitants were characterized by their strong family bonds, a strong work and religious ethic and can do attitude. Experts theorize that modern technology and the invention of things like live streaming, social media, and smart phones along with the breakup of family groups have rendered them virtually extinct in spite of their being well armed and capable of getting by on very little.... 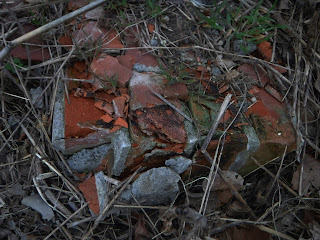 Posted by thatoneoldguy at 6:07 PM No comments: