Blown out rivers, some pretty serious family health issues and then some personal illness of my own all have combined to pretty much keep me off the water lately. But over my own illness and with the day free, I decided to fish somewhere. Anywhere. I ended up at one of SW Ohio's wildlife areas hitting a couple ponds. The first pond was gin clear but ringed with moss as well as having aquatic vegetation growing up to within a foot or so of the surface over most of it. A perfect situation for a buzzbait. I ended up catching four decent bass on the buzz. A fun and cool way to catch fish in my book. The next pond was nothing like the first. No moss or weeds instead it was slightly muddy with a few huge grass carp cruising around like submarines. About two casts in and a deer started blowing at me from the thicket below the ponds dam. An hour later I was wishing I'd stayed at the first pond. No action at all. I began to throw everything including the proverbial kitchen sink at them to no avail. I took the casting rod back to the truck and broke out the spinning rod and an unweighted plastic worm thinking I'd finesse a fish into hitting. No go. About then a small snake began swimming across the pond like we have all seen a hundred times. I thought how much the ribbon tailed worm I had on resembled a small snake and the next cast began swimming it slowly across the top. A decent bass slurped it down! A coincidence for sure but it was the first strike in well over an hour. Two casts later a swirl and another nice bass nailed the swimming worm. I'd like to say I went on and killed them. Not so but I did catch two more and miss a strike. As well as watch a five or six inch bass grab the six inch worm by the tail and refuse to let go playing tug of war with me. beautiful weather, some fish were caught and maybe I learned something, a pretty cool day in my book. 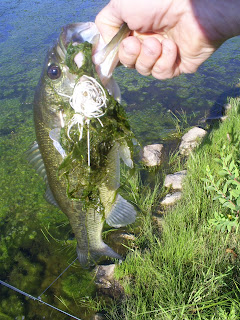 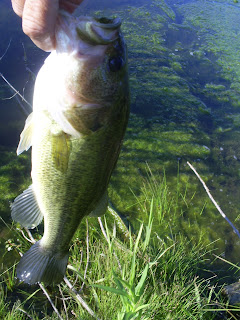 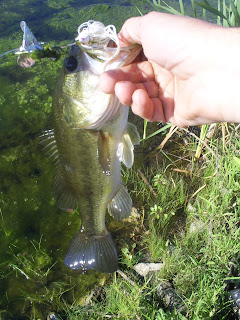 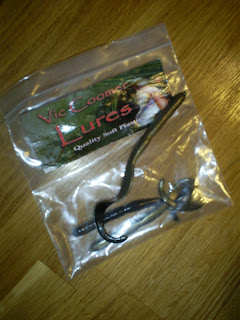 Posted by thatoneoldguy at 9:10 PM No comments:

Just the other day I posted some fish photos on Ohio Game Fishing's forum and somebody asked what was I was using. Rather than give him a throw away answer I decided to try and give the question a good answer, Anyways I thought it interesting enough to post here...
I think it's been about a year since I've given what one guy called the sermon. Let's see if I've gotten any better at it:
Just the other day Dan and I were fishing and this guy was there seining bait. He had a bunch caught and we both separately looked at what he had and made our lure choices according to what we both thought best approximated what we saw. Only the next day when talking about it did we both realize the other had done the same thing. For you see most of the rivers around here hold an astonishing variety of baitfish, The big three, The GMR, LMR and WWR all hold something like ten or twelve different shiner species, ten or twelve darter species and maybe fifteen other things like minnows, chubs, madtoms etc. Now every riffle or pool doesn't hold each of these, instead each fills it's own little niche according to that particular stretch of streams habitat. One riffle might be full of greenside darters and logperch while a hundred yards away 70% of the forage is spotfin shiners. And not only does each of these guys look different they act differently. So how do you make sense out of all this chaos?
Well there are a few different approaches. If you fish the same piece of river over and over it might be worth your time to buy a seine and a cast net and sample all the different habitats in your section of river. You could also go to the EPA sampling data and see if that helps you. If you google "water quality and biological reports index" you will find all the studies done on our local waters. Look under the appendices, that's where the tables of good stuff is. Then go to ODNR's species guide online, it has photos of all of our baitfish plus a bit on their habits and lifestyles.  There are also some general guidelines you can use anywhere. Usually the closer to the shallowest water of the riffle the smaller, rounder and darker the average baitfish, things like darters and madtoms while the pools hold more things like shiners that are flatter and lighter in color. But like I said each piece of river is different than every other.
So going back to answering your question. The guy had a bunch of round bodied light colored minnows that varied in length from about three inches long to maybe five. I was throwing a Vic Coomer grub that was clear with silver flakes while Dan I think was throwing a light colored knock off of a Keitech Swing Impact. I try to carry three or four colors of Vic's grubs plus all three sizes of his curly shad in assorted colors to imitate flatter profile baitfish. I'd say 90 percent of the time I can get the results I want with these. Other baits I think work swell around here are River Rock swimbaits, keitechs, Big Joshy and the Jewel Sculpin. All of which look and act differently than each other. Just like the baitfish in our rivers. If, If I could only use one color of one bait, which I wouldn't want to do, I'd use Vic's three inch grub in either smoke metalflake or clear with metalflake. Those two are usually my starting points.
I'd like to throw one more thing out there. It's a scientific fact that big smallmouth hear better, taste better, their lateral lines work better, they smell better and they even see things better than smaller smallmouth bass. And in a bunch of studies it's been proven that bigger smallmouth are more selective than smaller bass. In other words taking the time to learn about the baitfish in your particular piece of river might not help you catch more smallmouth but I'm pretty sure it makes a difference in the quality of the fish you catch.  Hopefully that wasn't too long winded an answer. I just didn't want to say "throw a purple pluot, it works better than everything else".
It's a puzzle we have to figure out every time we go.
Posted by thatoneoldguy at 11:11 PM No comments:

A couple nights and a day

The last week or so I haven't gotten to fish as much as I'd like. It probably still seems like a lot to normal people like say my wife but it wasn't as much as I'd like. So to stretch things out a bit I got out at night for and hour or so after work a few times. Throwing big curly shads trying for a shovelhead. Which I caught three of this week but they just weren't very big. I did have a good one on one night but it pulled the hook in the middle of a strong run. If you have never been out in the middle of the night throwing a big swim bait or a lipless crankbait for shovelheads your missing the next big undiscovered thing in fishing, its a blast.

But today I had free to fish. Gloriously free. I was supposed to meet someone on the water but he didn't show so I headed out solo. Solo at dawn can be a good thing. A deer bounded off thru the dark while squirrels and birds mobbed a mulberry tree. I helped myself to a few also as the path was covered in dark purple fruit. Just keep to the purple ones, the unripe ones have hallucinogenic properties. I remember one person stating they ate unripe mulberries as a child and the whole world turn to liquid for a day! Supposedly native peoples ate them to induce visions. Come to think of it I did fall flat twice today wading and I'm usually a pretty good wader.

It was a good day. First a decent hybrid stopped the grub in mid drift. Then a tiny smallmouth bopped the jig pretending it was a bigger fish. A half an hour later a much nicer stripe slammed the grub and the drag lit up with that beautiful sound. Although skinny the fish stretched the tape to 25 inches. After that things began to slow. The phone beeped. It was Dan, his day also freed itself up and we met at the river. Already afield I got there first and caught a dandy channel and a big ole carp before Dan arrived. Oh and I climbed out of the river over a steep little bank and walked right into a campsite. Everybody was still asleep except for a pretty girl in the middle of a wardrobe change. I don't know who was more startled her or I but apologized as fast as I could and split before anyone else woke up. Dan showed up and then proceeded to catch a couple small hybrids while I a few feet away caught zero. From there we wandered to yet another spot where a few more channels were caught and a couple pretty smallmouth. I think Dan's was 16 or so while I got lucky and a nineteen inch fish hit my grub. I know it doesn't quite look it but it was, I taped it. It's just the Dan the
photo guy obviously hates me and tried to make it look smaller than it was Tired and whipped but happy with some quality fish I left leaving Dan there fishing. I had to pass back by camp to leave and everybody was awake this time but friendly. But later Dan said the girl I saw half naked caught a huge smallmouth and stuffed it in a cooler so maybe they weren't so cool after all... 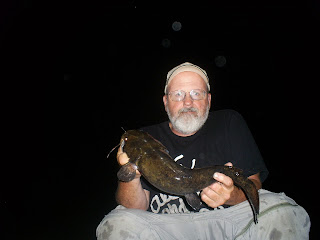 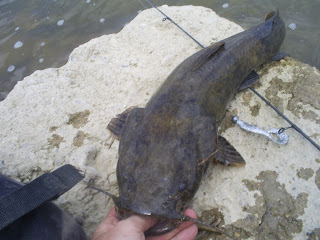 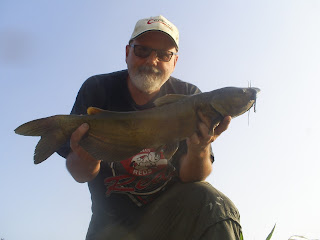 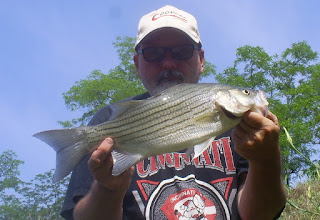 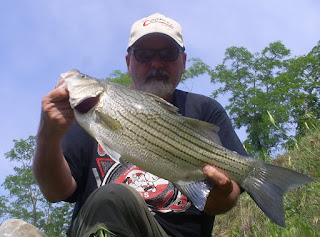 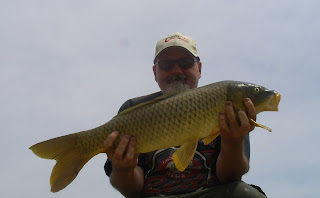 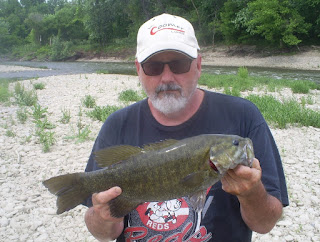 Posted by thatoneoldguy at 8:45 AM No comments: